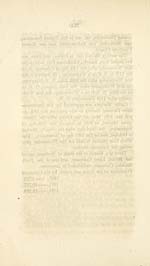 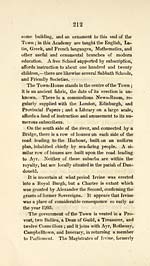 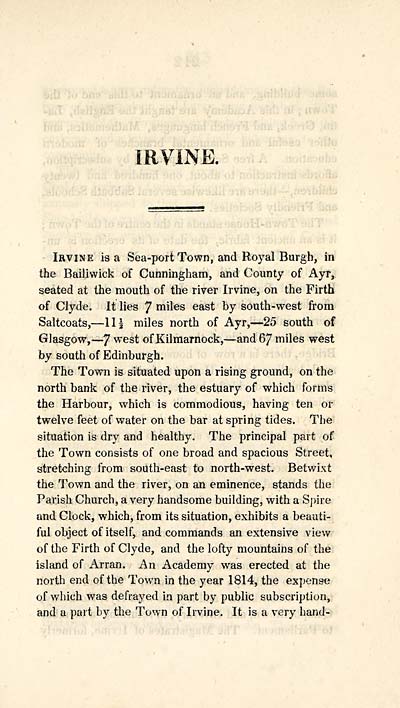 IRV r INE.
Irvine is a Sea-port Town, and Royal Burgh, in
the Bailiwick of Cunningham, and County of Ayr,
seated at the mouth of the river Irvine, on the Firth
of Clyde. It lies 7 miles east by south-west from
Saltcoats, — 11 1 miles north of Ayr, — 25 south of
Glasgow,— 7 weg t of Kilmarnock, — and 67 miles west
by south of Edinburgh.
The Town is situated upon a rising ground, on the
north bank of the river, the estuary of which forms
the Harbour, which is commodious, having ten or
twelve feet of water on the bar at spring tides. The
situation is dry and healthy. The principal part of
the Town consists of one broad and spacious Street,
stretching from south-east to north-west. Betwixt
the Town and the river, on an eminence, stands the
Parish Church, a very handsome building, with a Spire
and Clock, which, from its situation, exhibits a beauti-
ful object of itself, and commands an extensive view
of the Firth of Clyde, and the lofty mountains of the
island of Arran. An Academy was erected at the
north end of the Town in the year 1814, the expense
of which was defrayed in part by public subscription,
and a part by the Town of Irvine. It is a very hand-