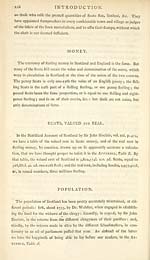 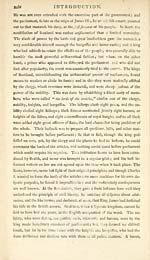 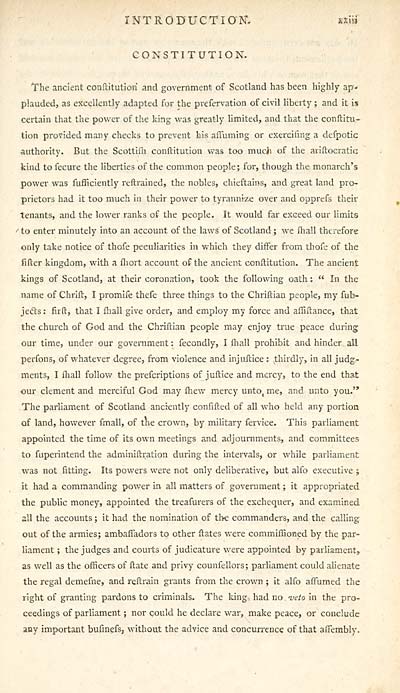 INTRODUCTION. *xi*
CONSTITUTION.
The ancient conftitutiori and government of Scotland has been highly ap-
plauded, as excellently adapted for the prefervation of civil liberty ; and it is
certain that the power of the king was greatly limited, and that the conftitu-
tion provided many checks to prevent his affuming or exercifing a defpotic
authority. But the Scottifh conftitution was too much of the ariftocratic
kind to fecure the liberties of the common people; for, though the monarch's
power was fufficiently reftrained, the nobles, chieftains, and great land pro-
prietors had it too much in their power to tyrannize over and opprefs their
tenants, and the lower ranks of the people. It would far exceed our limits
' to enter minutely into an account of the laws of Scotland ; we fhall therefore
only take notice of thofe peculiarities in which they differ from thofc of the
fifter kingdom, with a fhort account of the ancient conftitution. The ancient
kings of Scotland, at their coronation, took the following oath : " In the
name of Chrift, I promife thefe three things to the Chriftian people, my fub-
jedts: firft, that I fhall give order, and employ my force and afliftance, that
the church of God and the Chriftian people may enjoy true peace during
our time, under our government : fecondly, I fhall prohibit and hinder all
perfons, of whatever degree, from violence and injuftice : thirdly, in all judg-
ments, I fhall follow the prefcriptions of juftice and mercy, to the end that
our clement and merciful God may fhew mercy unto, me, and unto you."
The parliament of Scotland anciently confifted of all who held any portion
of land, however fmall, of the crown, by military fervice. This parliament
appointed the time of its own meetings and adjournments, and committees
to fuperintend the adminiftration during the intervals, or while parliament
was not fitting. Its powers were not only deliberative, but alio executive 5
it had a commanding power in all matters of government ; it appropriated
the public money, appointed the treafurers of the exchequer, and examined
all the accounts ; it had the nomination of the commanders, and the calling
out of the armies; ambaffadors to other ftates were commiffioned by the par-
liament ; the judges and courts of judicature were appointed by parliament;,
as well as the officers of ftate and privy counfellors; parliament could alienate
the regal demefne, and reftrain grants from the crown ; it alfo affiimed the
right of granting pardons to criminals. The lung had no veto in the pro-
ceedings of parliament ; nor could he declare war, make peace, or conclude
any important bufinefs, without the advice and concurrence of that afTembly,