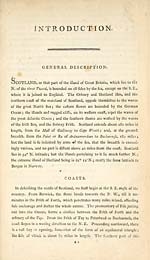 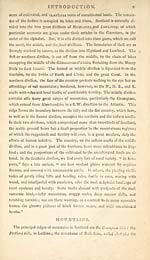 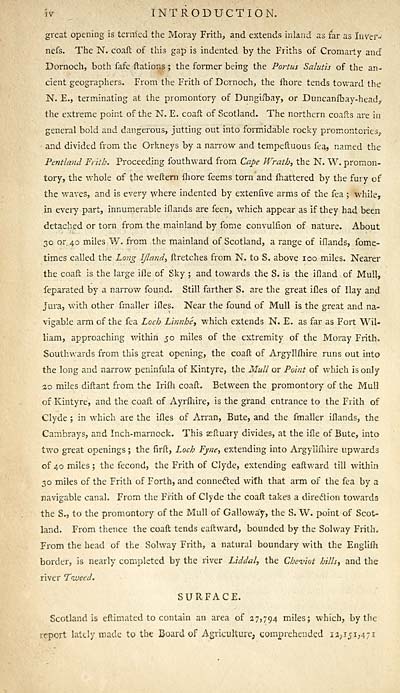 iv INTRODUCTION.
great opening is termed the Moray Frith, and extends inland as far as Inver-
nefs. The N. coaft of this gap is indented by the Friths of Cromarty and
Dornoch, both fafe ftations ; the former being the Portus Salutis of the an-
cient geographers. From the Frith of Dornoch, the fhore tends toward the
N. E., terminating at the promontory of Dungifbay, or Duncanfbay-head,-
the extreme point of the N. E. coaft of Scotland. The northern coafts are in
general bold and dangerous, jutting out into formidable rocky promontories,
and divided from the Orkneys by a narrow and tempeftuous fea, named the
Pentland Frith. Proceeding ibuthward from Cape Wrath, the N. W. promon-
tory, the whole of the weftern fhore feems torn and mattered by the fury of
the waves, and is every where indented by extenfive arms of the fea ; while,
in every part, innumerable iflands are feen, which appear as if they had been
detached or torn from the mainland by fome convulfion of nature. About
30 or, 40 miles W. from the mainland of Scotland, a range of iflands, fome-
times called the Long IJland, ftretches from N. to S. above 100 miles. Nearer
the coaft is the large ifle of Sky ; and towards the S. is the ill and of Mull,
feparated by a narrow found. Still farther S. are the great ifles of Hay and
Jura, with other fmaller ifles. Near the found of Mull is the great and na-
vigable arm of the fea Loch Linnhe, which extends N. E. as far as Fort Wil-
liam, approaching within 50 miles of the extremity of the Moray Frith,
Southwards from this great opening, the coaft of Argyllfhire runs out into
the long and narrow peninfula of Kintyre, the Mull or Point of which is only
so miles diftant from the Irifh coaft. Between the promontory of the Mull
of Kintyre, and the coaft of Ayrfhire, is the grand entrance to the Frith of
Clyde ; in which are the ifles of Arran, Bute, and the fmaller iflands, the
Cambrays, and Inch-marnock. This asftuary divides, at the ifle of Bute, into
two great openings ; the firft, Loch Fyne, extending into Argyllfhire upwards
of 40 miles ; the fecond, the Frith of Clyde, extending eaftward till within
30 miles of the Frith of Forth, and connected with that arm of the fea by a
navigable canal. From the Frith of Clyde the coaft takes a direction towards
the S., to the promontory of the Mull of Galloway, the S. W. point of Scot-
land. From thence the coaft tends eaftward, bounded by the Solway Frith.
From the head of the Solway Frith, a natural boundary with the Englifh
border, is nearly completed by the river Liddal, the Cheviot hills, and the
river Tweed.
SURFACE.
Scotland is eftimated to contain an area of 279794 miles; which, by the
report lately made to the Board of Agriculture, comprehended ia ; iji,47i