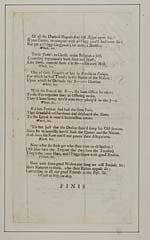 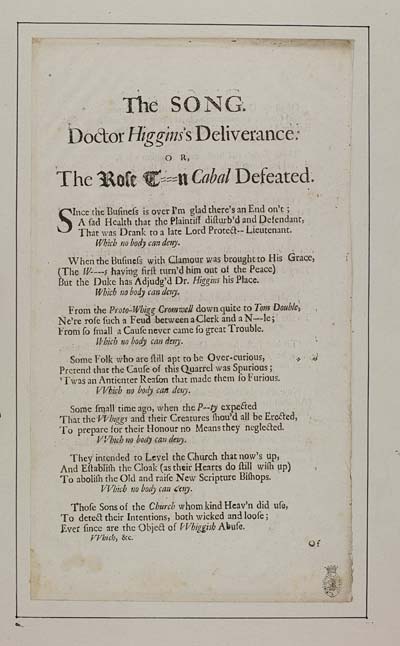 Since the Buſineſs is over I'm glad there's an End on't ;
A ſad Health that the Plaintiff diſturb'd and Defendant,
That was Drank to a late Lord Protect-- Lieutenant.
Which no body can deny.

When the Buſineſs with Clamour was brought to His Grace,
(The W----s having firſt turn'd him out of the Peace)
But the Duke has Adjudg'd Dr. Higgins his Place.
Which no body can deny.

From the Proto-Whigg Cromwell down quite to Tom Double,
Ne're roſe ſuch a Feud between a Clerk and a N---le ;
From ſo ſmall a Cauſe never came ſo great Trouble.
Which no body can deny.

Some Folk who are ſtill apt to be Over-curious,
Pretend that the Cauſe of this Quarrel was Spurious ;
'Twas an Antienter Reaſon that made them ſo Furious.
Which no body can deny.

Some ſmall time ago, when the P--ty expected
That the VVhiggs and their Creatures ſhou'd all be Erected,
To prepare for their Honour no Means they neglected.
VVhich no body can deny.

They intended to Level the Church that now's up,
And Eſtabliſh the Cloak (as their Hearts do ſtill wiſh up)
To aboliſh the Old and raiſe New Scripture Biſhops.
VVhich no body can deny.

Thoſe Sons of the Church whom kind Heav'n did uſe,
To detect their Intentions, both wicked and looſe ;
Ever ſince are the Object of Whiggish Abuſe.
VVhich, &c.