Down by th[e] old mill stream 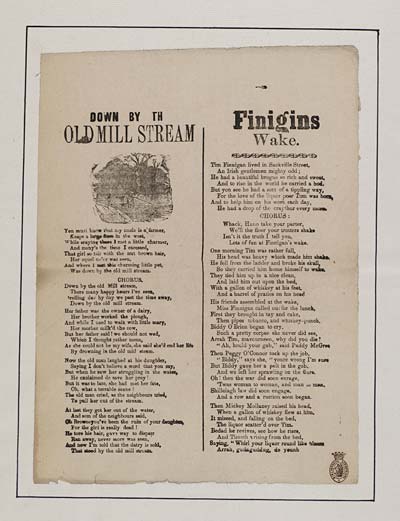 Yon must know that my nncle is a farmer,
Keeps a large formin the west,
While sraying these I met a little charmer,
And many's the time I caressed,
That girl so lair with the nut brown hair,
Her equel ne'er was seen,
And where I m t this charming little pet,
Was down by the old mill stream.

Her father was the owner of a dairy,
Her brother worked the plough,
And while I used to walk with little mary,
Her morher milk'd the cow,
But her father said ! we should not wed,
Which I thought rather mean,
As she could not be my wife, she said she'd end her life
By drowning in the old mill steam.

Now the old man laughed at his daughter,
Saying I don't believe a word that you say,
But when he saw her struggling in the water,
He exclaimed do save her pray !
But it was to late, she had met her fate,
Oh, what a terrable scene !
The eld man cried, as the neighbours tried,
To pull her out of the stream.

At last they got her out of the water,
And som of the neighbours said,
Oh Browneyou've been the ruin of your daughter,
For the girl is really dead !
He tore his hair, gave way to dispair
Ran away, never more was seen,
And nowI'm told that the datry is sold,
That stoodby the old mill stream.

Tim Finnigan lived in Sackville Street,
An Irish gentlemen mighty odd ;
He had a beautiful brogue so rich and sweet,
And to rise in the world he carried a hod.
But yon see he had a sort of a tippling way,
For the love of the liquor poor Tom was born,
And to help him on his work each day,
He had a drop of the craythur every morn.

Whack, Huno take your parter,
We'll the floor your trotters shake
Isn't it the truth I tell you,
Lots of fun at Finnigan's wake.

One morning Tim was rather full,
His head was heavy which made him shake.
He fell from the ladder and broke his skull,
So they carried him home himself to wake.
They tied him up in a nice clean,
And laid him out upon the bed,
With a gallon of whiskey at his feet,
And a barrel of praties on his head

His friends assembled at the wake,
Miss Finnigan called out for the lunch,
First they brought in tay and cake,
Then pipes tobacco, and whiskey-punch,
Biddy O Brien began to cry,
Such a pretty corpse she never did see,
Arrah Tim, mayourneen, why did you die ?
" Ah, hould your gab," said Paddy MeGrea

Then Peggy O'Connor tuck up the job,
" Biddy," says she, " youre wrong I'm sure
But Biddy gave her a pelt in the gob,
And we left her sprawling on the ſlure.
Oh ! then the war did soon enrage,
'Twas woman to woman, and man to man,
Shillelagh law did soon engage,
And a row and a ruction soon began.

Then Mickey Mollaney raised his head,
When a gallon of whiskey flew at him.
It missed, and falling on the bed,
The liquor scatter'd over Tim.
Bedad he revives, see how he rises,
And Timoth vrising from the bed,
Saying, " Whirl your liquor round like bl
Arrah, gudaguddug, doyounh