Cure for a drunken husband 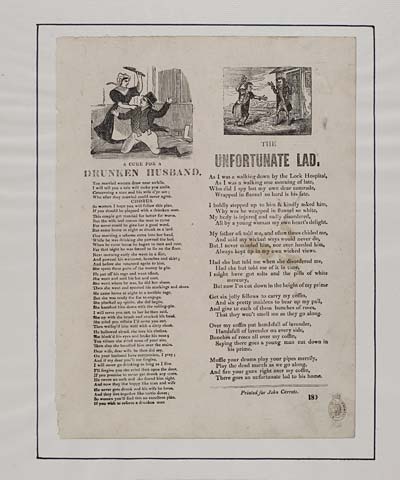 A CURE FOR A

You married women draw near awhile,
I will tell you a tale will make you smile,
Concerning a man and his wife d'ye see ;
Who after they married could never agree.

So women I hope you will follow this plan,
If you should be plagued with a drunken man.
This couple got married for better for worse,
But the wife had reason the man to curse
For never could he give her a good word,
But came home at night as drunk as a lord-

One morning a scheme came into her head,
While he was drinking she pawned the bed,
When he came home he began to rant and roar,
For that night he was forced to lie on the floor.

Next morning early she went in a flirt,
And pawned his waistcoat, breeches and shirt;
And before she returned again to him,
She spent three parts of the money in gin.

He came home at night in a terrible rage,
But. she was ready the foe to engage,
She plucked up spirits, she did begin,
She knocked him down with the rolling-pin.

I will serve you out, to her be then said,
She up with the brush and cracked his head,
She cried you villain I'll serve you out,
Then wallop'd him well with a dirty clout.

He hallowed aloud, she tore his clothes,
She black'd his eyes and broke his nose ,
You villain she cried none of your airs,
Then slap she bundled him over the stairs.

Dear wife, dear wife he then did say,
On your husband have compassion, I pray ;
And if my dear you'll me forgive,
I will never go drinking as long as I live,

I'll forgive you she cried then open the door,
If you promise to never get drunk any more,
He swore an oath and she found him right.
And now they live happy like man and wife

He never gets drunk and his wife he loves,
And they live together like turtle doves;
So women you'll find this an excellent plan,
If you wish to reform a drunken man.

I boldly stepped up to him & kindly asked him,
Why was he wrapped in flannel so white,
My body is injured and sadly disordered,
All by a young woman my own heart's delight.

My father oft told me, and often times chided me,
And said my wicked Ways would never do,
But I never minded him, nor ever heeded him,
Always kept up in my own wicked views.

Get six jolly fellows to carry my coffin,
And six pretty maidens to bear up my pall,
And give to each of them bunches of roses,
That they won't smell me as they go along.

Muffle your drums play your pipes merrily,
Play the dead march as we go along,
And fire your guns right over my coffin,
There goes an unfortunate lad to his home.