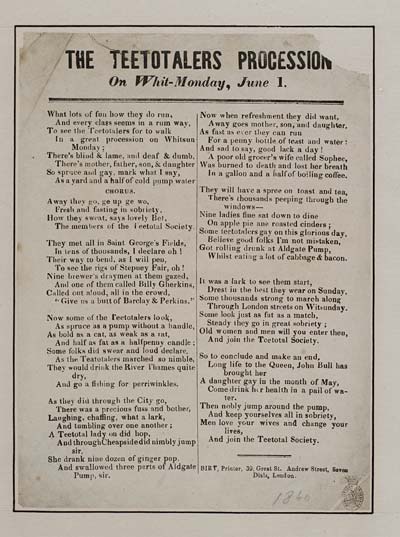 What lots of fun how they do run,
And every class seems in a rum way,
To see the Taetotalers for to walk
In a great procession on Whitsun
Monday ;
There's blind & lame, and deaf & dumb,
There's mother, father, son, & daughter
So spruce aud gay, mark what I say,
As a yard and a half of cold pump water

Away they go, ge up ge wo,
Fresh and fasting in sobriety,
How they sweat, says lovely Bet,
The members of the Teetotal Society.

They met all in Saint George's Fields,
In lens of thousands, I declare oh !
Their way to bend, as I will pen,
To see the rigs of Stepney Fair, oh !
Nine brewer's draymen at them gazed,
And one of them called Billy Gherkins,
Called out aloud, all in the crowd,
" Give us a butt of Barclay & Perkins."

Now some of the Teetotalers look,
As spruce as a pump without a handle,
As bold as a cat, as weak as a rat,
And half as fat as a halfpenny candle ;
Some folks did swear and loud declare,
As the Teatotalers marched so nimble,
They would drink the River Thames quite
dry,
And go a fishing for perriwinkles.

As they did through the City go,
There was a precious fuss and bother,
Laughing, chaffing, what a lark,
And tumbling over one another ;
A Teetotal lady on did hop,
And throughCheapside did nimbly jump
sir,
She drank nine dozen of ginger pop.
And swallowed three parts of Aldgate
Pump, sir.

Now when refreshment they did want,
Away goes mother, son, and daughter,
As fast as ever they can run
For a penny bottle of tcast and water
And sad to say, good lack a day !
A poor old grocer's wife called Sophee,
Was burned to death and lost her breath
In a gallon and a half of boiling coffee.

They will have a spree on toast and tea,
There's thousands peeping through the
windows—
Nine ladies fine sat down to dine
On apple pie ane roasted cinders ;
Some teetotalers gay on this glorious day,
Believe good folks I'm not mistaken,
Got rolling drunk at Aldgate Pump,
Whilst eating a lot of cabbage & bacon.

It was a lark to see them start,
Drest in the best they wear on Sunday,
Some thousands strong to march along
Through London streets on Witsunday.
Some look just as fat as a match,
Steady they go in great sobriety ;
Old women and men will you enter then,
And join the Teetotal Society.

So to conclude and make an end,
Long life to the Queen, John Bull has
brought her
A daughter gay in the month of May,
Come drink her health in a pail of wa-
ter,
Then nobly jump around the pump,
And keep yourselves all in sobriety,
Men love your wives and change your
lives,
And join the Teetotal Society.