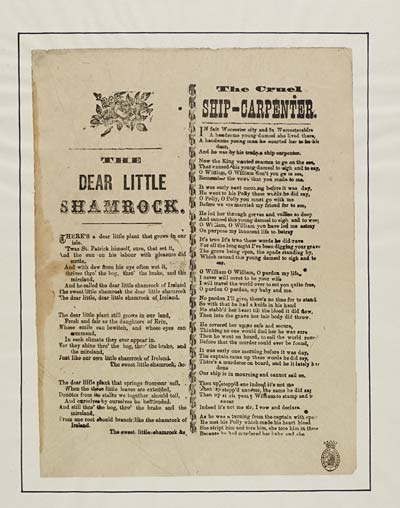 The dear little plant still grows in our land,
Fresh and fair as the daughters of Erin,
Whose smile can bewitch, and whose eyes can
command,
In each climate they ever appear in.
For they shine thro' the bog, thro' the brake, and
the mireland,
Just like our own little shamrock of Ireland.
The sweet little shamrock, &c.

The dear little plan that springs from our soil,
When the three little leaves are extended,
Denotes from its stalks we together should toil,
And ourselves by ourselves be befriended.
And still thro' the bog, thro' the brake and the
mireland,
From one root should branch like the shamrock of
Ireland.
The sweet little shamrock &c.

IN fair Wore ster city and in Worcestershire
A handsome young damsel she lived there,
A handsome young man he courted her to be his
dear,
And he was by his trades ship carpenter.
Now the King wanted seamen to go on the sea,
That caused this young damsel to sigh and to say,
O William, O William don't you go to sea,
Remember the vows that you made to me.
It was early next morning before it was day,
He went to his Poly these words he did say,
O Polly, O Polly you must go with me
Before we are married my friend for to see,
Holed her through groves and vallies so deep
And caused this young damsel to sigh and to wee
O Wi iam, O William you have led me astray
On purpose my innocent life to betray
It's true It's true these words he did rave
For all the long night I've been digging your grave
The grave being open, the spade standing by,
Which causad this young damsel to sigh and to
y.
O William O William, O pardon my life,
I never will covet to be your wife
I will travel the world over to set you quite free,
O pardon O pardon, my baby and me.
No pardon I'll give, there's no time for to stand
So with that he had a knife in his hand
He stabb'd her heart till the blood it did flow,
Then into the grave her fair body did throw.
He covered her up so safe and secure,
Thinking no one would find her he was sure
Then he went on board, to sail the world round
Before that the murder could ever be found,
It was early one morning before it was day,
The captain came up these words he did say,
Thtre's a murderer on board, and he it lately has
done
Our ship is in mourning and cannot sail on.
Then up stepp'd one indeed it's not me
Then up stepp'd anodrer, the same he did sa
Then up st t oung William to stamp and to
swear
Indeed it's not me sir, I vow and declare.

As he was a turning from the captain with spe
He met his Polly which made his heart bleed
She stript him and tore him, she tore him in thro
Because e had ro rdered her baby and she