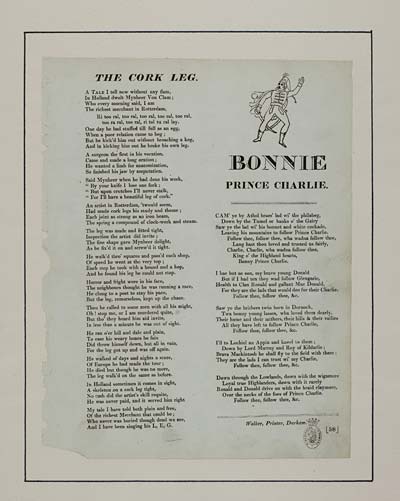 A surgeon the first in his vocation.
Came and made a long oration ;
He wanted a limb for anatomization,
So finished his jaw by amputation.

Said Mynheer when he had done his work,
" By your knife I lose one fork ;
" But upon crutches I'll never stalk,
" For I'll have a beautiful leg of cork."

An artist in Rotterdam, 'twould seem,
Had made cork legs his study and theme ;
Each joint as strong as an iron beam,
The spring a compound of clock-work and steam.

The leg was made and fitted tight,
Inspection the artist did invite ;
The fine shape gave Mynheer delight,
As he fix'd it on and screw'd it tight.

He walk'd thro' squares and pass'd each shop,
Of speed he went at the very top ;
Each step he took with a bound and a hop,
And he found his leg he could not stop.

Horror and fright were in his face,
The neighbours thought he was running a race,
He clung to a post to stay his pace,
But the leg, remorseless, kept up the chace.

Then he called to some men with all his might,
Oh ! stop me, or I am murdered quite,
But tho' they heard him aid invite,
In less than a minute he was out of sight.

He ran o'er hill and dale and plain,
To ease his weary bones he fain
Did throw himself down, but all in vain,
For the leg got up and was off again.

He walked of days and nights a score,
Of Europe he had made the tour ;
He died but though he was no more,
The leg walk'd on the same as before.

In Holland sometimes it comes in sight,
A skeleton on a cork leg tight,
No cash did the artist's skill requite,
He was never paid, and it served him right

My tale I have told both plain and free,
Of the richest Merchant that could be ;
Who never was buried though dead we see,
And I have been singing his L, E, G.

I hae but ae son, my brave young Donald
But if I had ten they wad follow Glengarie,
Health to Clan Ronald and gallant Mac Donald,
For they are the lads that would dee for their Charlie.
Follow thee, follow thee, &c.

Saw ye the brithers twin born in Dornock,
Twa bonny young lasses, wha loved them dearly,
Their hame and their mithers, their hills & their vallies
All they have left to follow Prince Charlie,
Follow thee, follow thee, &c.

I'll to Lochiel an Appin and kneel to them ;
Down by Lord Murray and Roy of Kildarlie ;
Brave Mackintosh he shall fly to the field with them ;
They are the lads I can trust wi' my Charlie,
Follow thee, follow thee, &c.

Down through the Lowlands, down with the wigamore
Loyal true Highlanders, down with it rarely
Ronald and Donald drive on with the braid claymore,
Over the necks of the foes of Prince Charlie.
Follow thee, follow thee, &c.