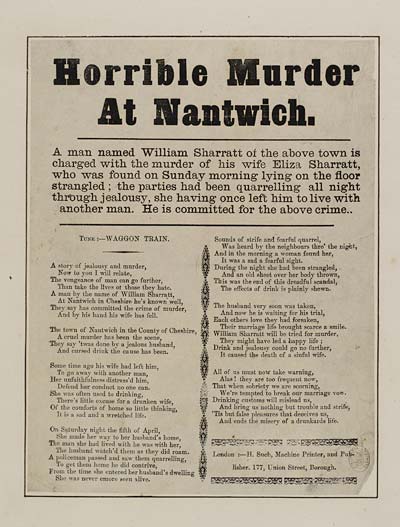 A man named William Sharratt of the above town is
charged with the murder of his wife Eliza Sharratt,
who was found on Sunday morning lying on the floor
strangled ; the parties had been quarrelling all night
through jealousy, she having once left him to live with
another man. He is committed for the above crime..

A story of jealousy and murder,
Now to you I will relate,
The vengeance of man can go further,
Than take the lives of those they hate.
A man by the name of William Sharratt,
At Nantwich in Cheshire he's known well,
They say has committed the crime of murder,
And by his hand his wife has fell.

The town of Nantwich in the County of Cheshire,
A cruel murder has been the scene,
They say 'twas done by a jealous husband,
And cursed drink the cause has been.

Some time ago his wife had left him,
To go away with another man,
Her unfaithfulness distress'd him,
Defend her conduct no one can.
She was often used to drinking,
There's little excuse for a drunken wife,
Of the comforts of home so little thinking,
It is a sad and a wretched life.

On Saturday night the fifth of April,
She made her way to her husband's home,
The man she had lived with he was with her,
The husband watch'd them as they did roam.
A policeman passed and saw them quarrelling,
To get them home he did contrive,
From the time she entered her husband's dwelling
She was never emore seen alive.

Sounds of strife and fearful quarrel,
Was heard by the neighbours thro' the night,
And in the morning a woman found her,
It was a sad a fearful sight.
During the night she had been strangled,
And an old sheet over her body thrown,
This was the end of this dreadful scandal,
The effects of drink is plainly shown.

The husband very soon was taken,
And now he is waiting for his trial,
Each others love they had forsaken,
Their marriage life brought scarce a smile.
William Sharratt will be tried for murder,
They might have led a happy life ;
Drink and jealousy could go no further,
It caused the death of a sinful wife.

All of us must now take warning,
Alas ! they are too frequent now,
That when sobriety we are scorning,
We're tempted to break our marriage vow.
Drinking customs will mislead us,
And bring us nothing but trouble and strife,
'Tis but false pleasures that deceives us,
And ends the misery of a drunkards life.