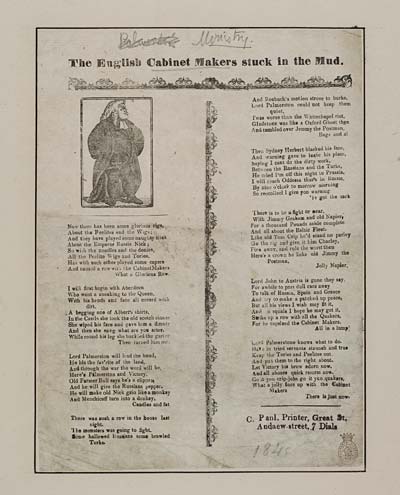 The English Cabinet Makers stuck in the Mud.

Now there has been some glorious rigs,
About the Reelites and the Wigs ;
And they have played some naughty trick
About the Emperor Russia Nick ;
So with the noodles and the donies,
All the Peelite Wigs and Tories,
Has with each other played some capers
And caused a row with the CabinetMakers
What a Glorious Row.

I will first begin with Aberdeen
Who went a sneaking to the Queen,
With his hands and face all coverd with
dirt,
A begging one of Albert's shirts,
In the Castle she took the old scotch sinner
She wiped bis face and gave him a dinner
And then she sung what are yon arter,
While round his leg she buckled the garter
Then turned him out :

Lord Palmerston will lead the band,
He his the fav'rite of the land,
And through the war the word will be,
Here's Palmerston and Victory.
Old Farmer Bull says he's a clippe
And he will give the Russians pepper.
He will make old Nick grin like a monkey
And Menchicoff turn into a donkey.
Candles and fat

There was such a row in the bouse last
night.
The monsters was going to fight.
Some hallowed Russians some brawled
Turks.
And Roebuck's motion strove to burke,
Lord Palmerston could not keep them
quiet,
I was worse than the Whitechapel riot,
Gladstone was like a Oxford Ghost then
And tumbled over Jemmy the Postman,
Bags and al

Then Sydney Herbert blacked his face,
And warning gave to leave his place,
Saying I cant do the dirty work,
Between the Russians and the Turks,
He cried I'm off this night to Prussia,
I will reach Oddessa that's in Russia,
By nine o'clock to morrow morning
So reccollecl I give you warning
'lv got the sack

There is to be a fight or near,
With Jimmy Graham and old Napier,
For a thousand Pounds aside complete
And all about the Baltic Fleet,
Like old Tom Crip he'd stand no parley
Go the rig and give it him Charley,
Fire away, and rule the worst then
Here's a crown he licks old Jimmy the
Postman,
Jolly Napier.

Lord John to Austria is gone they say,
For awhile to pass dull care away
To talk of Russia, Spain and Greece
And try to make a patched up peace,
But all his views I wish may fit it,
And n squals I hope he may get it,
Strike up a row with all the Quakers,
For he capsized the Cabinet Makers.
All in a lump

Lord Palmerstone knows what to do.
Have in tried servants staunch and true
Keep the Tories and Peelites out
And put them to the right about.
Let Victory his brow adorn now,
And all abuses quick rerorm now.
Go it you crip-jobs go it you quakers,
What a jolly fiare op with the Cabinet
Makers
There is just now.