Beware of rows at Nottinghill 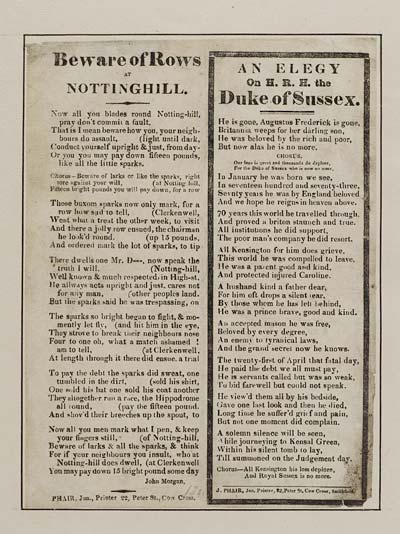 Now all you blades round Notting-hill,
pray don't commit a fault,
That is I mean beware how you, your neigh-
bours do assault,          (light until dark,
Conduct yourself upright & just, from day-
Or you you may pay down fifteen pounds,
like all the little sparks.

Chorus—Beware of larks or like the sparks, right
sore against your will,                (at Notting hill,
Fifteen bright pounds you will pay down, for a row

To pay the debt the sparks did sweat, one
tumbled in the dirt,           (sold his shirt,
One sold his hat one sold his coat another
They altogether run a race, the Hippodrome
all round,            (pay the fifteen pound.
And shov'd their breeches up the spout, to

Now all you men mark what I pen, & keep
your fingers still,         (of Notting-hill,
Beware of larks & all the sparks, & think
For if your neighbours you insult, who at
Notting-hill does dwell, (at Clerkenwell
You may pay down 15 bright pound some day
John Morgan.

He is gone, Augustus Frederick is gone,
Britannia weeps for her darling son,
He was beloved by the rich and poor,
But now alas he is no more.

Our loss is grent and thousands do deplore,
For the Duke of Sussex who is now no more.

In January he was born we see,
In seventeen hundred and seventy-three,
Sevnty years he was by England beloved
And we hope he reigns in heaven above.

70 years this world he travelled through,
And proved a briton staunch and true.
All institutions he did support,
The poor man's company he did resort.

All Kensington for him does grieve,
This world he was compelled to leave,
He was a parent good and kind,
And protected injured Caroline.

A husband kind a father dear,
For him oft drops a silent ear,
By those whom he has left behind,
He was a prince brave, good and kind.

An accepted mason he was free,
Beloved by every degree,
An enemy to tyranical laws,
And the grand secret now he knows.

The twenty-first of April that fatal day,
He paid the debt we all must pay,
He is servants called but was so weak,
To bid farewell but could not speak.

He view'd them all by his bedside,
Gave one last look and then he died,
Long time he suffer'd grief and pain,
But not one moment did complain.

A solemn silence will be seen,
While journeying to Kensal Green,
Within his silent tomb to lay,
Till summoned on the Judgement day.

Chorus—All Kensington his loss deplore,
And Royal Sussex is no more.