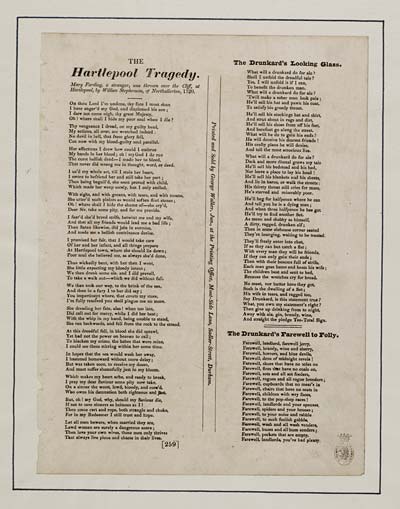 Mary Farding, a stranger, was thrown over the Cliff, at
Hartlepool, by Willian Stephenson, of Northallerton, 1720.

OH thou Lord I'm undone, thy face I must shun
I have anger'd my God, and displeased his son ;
I dare not come nigh, thy great Majesty,
Oh ! where shall I hide my poor soul when I die ?

Thy vengeance I dread, on my guilty head,
My actions, all over, are wretched indeed :
No devil in hell, that from glory fell,
Can now with my blood-guilty soul parallel.

Her affections I drew how could I embrue
My hands in her blood ; oh ! my God I do rue
The curst hellish deed—I made her to bleed,
That never did wrong me in thought, word, or deed.

I us'd my whole art, till I stole her heart,
I swore to befriend her and still take her part ;
Then being beguil'd, she soon proved with child,
Which made her weep sorely, but I only smiled.

With sighs, and with groans, with tears, and with moans,
She utter'd such plaints as would soften flint stones ;
Oh ! where shall I hide the shame of—she cry'd,
Dear Sir, take some pity, and for me provide.

I fear'd she'd breed strife, betwixt me and my wife,
And that all my friends would lead me a bad life ;
Then Satan likewise, did join in surmise,
And made me a hellish contrivance devise.

I promised her fair, that I would take care
Of her and her infant, and all things prepare
At Hartlepool town, where she should lie down ;
Poor soul she believed me, as always she'd done,

Thus wickedly bent, with her then I went,
She little expecting my bloody intent ;
We then drank some ale, and I did prevail,
To take a walk out—which we did without fail.

We then took our way, to the brink of the sea,
And then in a fury I to her did say ;
You impertinent whore, that covets my store,
I'm fully resolved you shall plague me no more.

She dreading her fate, alas ! when too late,
Did call out for mercy, while I did her beat ;
With the whip in my hand, being unable to stand,
She ran backwards, and fell from the rock to the strand.

At this dreadful fall, in blood she did sprawl,
Yet had not the power on heaven to call ;
To blacken my crime, the babes that were mine,
I could see them stirring within her some time.

In hopes that the sea would wash her away,
I hastened homeward without more delay ;
But was taken soon, to receive my doom,
And must suffer shamefully just in my bloom.

Which makes my heart ache, and ready to break,
I pray my dear Saviour some pity now take,
On a sinner the worst, lewd, bloody, and cure'd,
Who owns his damnation both righteous and just.

But, oh ! my God, why, should my Saviour die,
If not to save sinners as heinous as I !
Then come cart and rope, both strangle and choke,
For in my Redeemer I still trust and hope.

Let all men beware, when married they are,
Lewd women are surely a dangerous snare ;
Then love your own wives, those men only thrives
That always live pious and chaste in their lives.

He'll sell his stockings hat and shirt,
And strut about in rags and dirt,

He'll sell his shoes from off his feet,
And barefoot go along the street.

What will he do to gain his ends ?
He will deceive his dearest friends !

His crafty plans he will devise,
And tell the most atrocious lies.

What will a drunkard do for ale ?
Dark and more dismal grows my tale
He'll sell his bedstead and his bed,
Nor leave a place to lay his head !
He'll sell his blankets and his sheets,
And lie in barns, or walk the streets :
His thirsty throat still cries for more,
He's starved and miserably poor.

He'll beg for halfpence where he can
And tell you he is a dying man ;
And when three halfpence he has got
He'll try to find another Sot.
As mean and shabby as himself,
A dirty, ragged, drunken elf ;
Then in some alehouse corner seated
They're lounging, waiting to be treated.

They'll freely enter into chat,
If so they can but catch a flat ;
With every man they will be friends,
If they can only gain their ends ;
Then with their bosoms full of strife,
Each man goes home and beats his wife ;
The children beat and sent to bed,
Because the wretches cry for bread.

No meat, nor butter have they got,
Such is the dwelling of a Sot ;
His wife in tears, and ragged too,
Say Drunkard, is this statement true ?
What, you own my statement's right ?
Then give up drinking from to night,
Away with ale, gin, brandy, wine,
And straight the pledge Tee-Total Sign.

The Drunkard's Farewell to Folly.