Another present for old John Bull 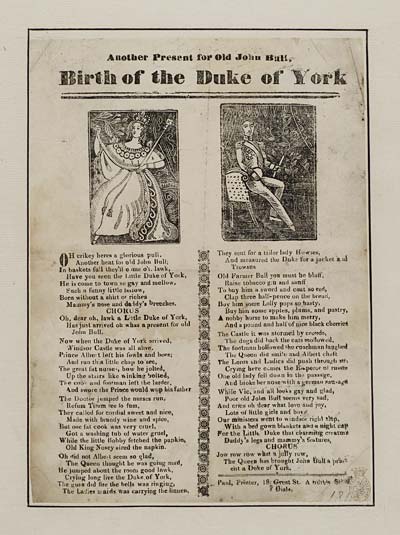 Another Present for Old John Bull,

Birth of the Duke of York

OH crikey heres a glorious pull,
Another heat for old John Bull;
In baskets full they'll come oh, lawk,
Have you seen the Little Duke of York,
He is come to town so gay and mellow,
Such a funny little fellow,
Born without a shirt o riches
Mammy's nose and daddy's breeches.
CHORUS
Oh, dear oh, lawk a Little Duke of York,
Has just arrived oh whas a present for old
John Bull.

Now when the Duke of York arrived,
Windsor Castle was all alive,
Prince Albert left his fowls and bees;
And run this little chap to see,
The great fat nurses, how he jolted,
Up the stairs like winking bolted,
The cook and footman left the larder,
And swore the Prince would wop his father

The Doctor jumped the nurses run,
Reſum Ti um ſee ſo ſum,
They called for cordial sweet and nice,
Made with brandy wine and spice,
But one fat cook was very cruel,
Got a washing tub of water gruel,
While the little Bobby fetched the papkin,
Old King Nosey aired the napkin.

Oh did not Albe t seem so glad,
The Queen thought he was going mad,
He jumped about the room good lawk,
Crying long live the Duke of York,
The guns did fire the bells was ringing,
The Ladies maids was carrying the linnen,
They sent for a tailor lady Howses,
And measured the Duke for a jacket and
Trowses

Old Farmer Bull you must be bluff,
Raise tobacco g n and snuff
To buy him a sword and coat so red,
Clap three half-pence on the bread,
Buy him some Lolly pops so hasty,
Buy him some apples, plums, and pastry,
A nobby horse to make him merry,
And a pound and half of nice black cherries

The Castle it was stormed by cro ds,
The dogs did back the cats mollowed,
The footman hollowed the coachman laughed
The Queen did smile and Albert chaft
The Lords and Ladies did push through sir,
Crying here come the Emperor of russia
One old lady fell down in the passage,
And broke her nose with a german sausage

While Vic. and all looks gay and glad,
Poor old John Bull seems very sad,
And cries oh dear what love and joy,
Lots of little girls and boys,
Our ministers went to Windsor right slap,
With a bed gown blankets and a night cap
For the Little Duke that charming creature
Daddy's legs and mammy's features,
CHORUS
Jow row row what a jolly row,
The Queen has brought John Bull a pres-
ent a Duke of York.