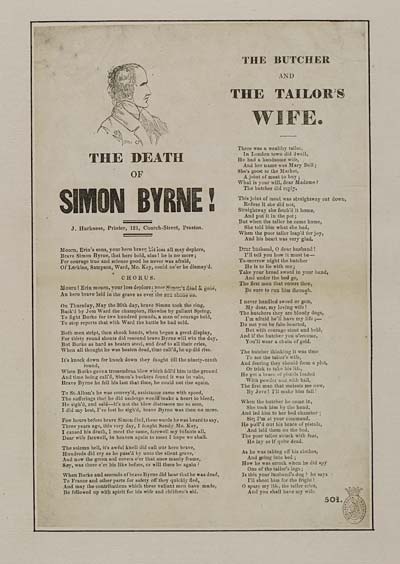 THE DEATH
OF
SIMON BYRNE !

Mourn, Erin's sons, your hero brave his loss all may deplore,
Brave Simon Byrne, that hero bold, alas ! he is no more ;
For courage true and science good he never was afraid,
Of Larking, Sampson, Ward, Mc. Kay, could ne'er be dismay'd.

Mourn ! Erin mourn, your loss deplore ; poor Simon's dead & gone,
An hero brave laid in the grave as ever the sun shone on.

On Thursday, May the 30th day, brave Simon took the ring,
Back'd by Jem Ward the champion, likewise by gallant Spring,
To fight Burke for two hundred pounds, a man of courage bold,
To stop reports that with Ward the battle he had sold.

Both men stript, then shook hands, when began a great display,
For thirty round shouts did resound brave Byrne will win the day,
But Burke as hard as beaten steel, and deaf to all their cries,
When all thought he was beaten dead, time call'd, he up did rise.

It's knock down for knock down they fought till the ninety-ninth
round,
When Burke gave a tremendous blow which fell'd him to the ground
And time being call'd, Simon's backers found it was in vain,
Brave Byrne he fell his last that time, he could not rise again.

To St-Alban's he was convey'd, assistance came with speed,
The sufferings that he did undergo would make a heart to bleed,
He sigh'd, and said—it's not the blow distresses me so sore,
I did my best, I've lost he sigh'd, brave Byrne was then no more.

Few hours before brave Simon died, these words he was heard to say,
Three years ago, this very day, I fought Sandy Mc. Kay,
I caused his death, I meet the same, farewell my infants all,
Dear wife farewell, in heaven again to meet I hope we shall.

The solemn bell, it's awful knell did call our hero brave,
Hundreds did cry as he pass'd by unto the silent grave,
And now the green sod covers o'er that once manly frame,
Say, was there e'er his like before, or will there be again ?

When Burke and seconds of brave Byrne did hear that he was dead,
To France and other parts for safety off they quickly fled,
And may the contributions which these valiant men have made,
Be followed up with spirit for his wife and children's aid.

THE BUTCHER
AND
THE TAILOR'S
WIFE.

There was a wealthy tailor,
In London town did dwell,
He had a handsome wife,
And her name was Mary Bell ;
She's gone to the Market,
A joint of meat to buy ;
What is your will, dear Madame ?
The butcher did reply.

This joint of meat was straightway cut down,
Refuse it she did not,
Straightway she fetch'd it home,
And put it in the pot ;
But when the tailor he came home,
She told him what she had,
When the poor tailor leap'd for joy,
And his heart was very glad.

Dear husband, O dear husband !
I'll tell you how it must be—
To-morrow night the butcher
He is to lie with me ;
Take your broad sword in your hand,
And under the bed go,
The first man that enters then,
Be sure to run him through.

I never handled sword or gun,
My dear, my loving wife !
The butchers they are bloody dogs,
I'm afraid he'll have my life ;—
Do not you be fain-hearted,
But with courage stout and bold,
And if the butcher you o'ercome,
You'll wear a chain of gold.

The butcher thinking it was time
To see the tailor's wife,
And fearing they should form a plot,
Or trick to take his life,
He got a brace of pistols loaded
With powder and with ball,
The first man that molests me now,
By Jove ! I'll make him fall !

When the butcher he came in,
She took him by the hand;
And led him to her bed chamber ;
Sir; I'm at your command.
He pull'd out his brace of pistols,
And laid them on the bed,
The poor tailor struck with fear,
He lay as if quite dead.

As he was taking off his clothes,
And going into bed ;
How he was struck when he did spy
One of the tailor's legs ;
Is this your husband's dog ? he says
I'll shoot him for the fright !
O spare my life, the tailor cries,
And you shall have my wife.