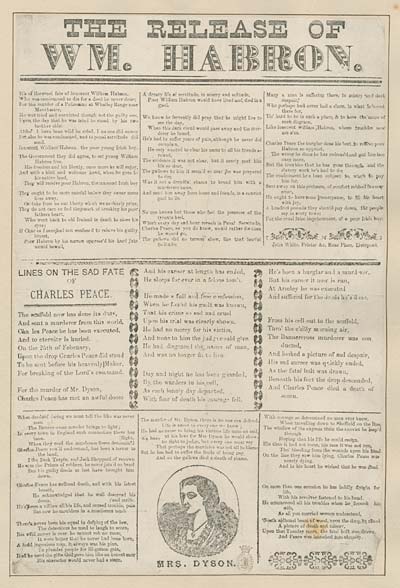 It's of the cruel fate of innocent William Habson,
Who wits condemned to die for a deed he never done;
For the murder of a Policeman at Whalley Range near
Manchester,
He was tried and convicted though not the guilty one.
Upon, the day that he was tried he stood by his two
brother side:
Altho I have been wild ho cried, I no one did annoy
But alas he was condemned, and to penal servitude did
send.
Innocent Wiiliam Habron. the poor young Irish boy.
The Government they did agree, to set young William
Habron free,
His freedem and his liberty, once more he will enjoy,
And with a kind and welcome hand, when the goes to
his native land,
They will receive poor Habron, the innocent Irish boy

They ought to be mora careful before they swear mens
lives away.
Or take from us our liberty which we so dearly prize,
They do not care or feel the smart. of breaking his poor
fathers heart,
Who went back to old Ireland in death to close his
eyes;
If Char us I eace had not confess d to releive his guilty
breast,
Poor Habron by his sorrow oppress'd his hard fate
would bewail,
A dreary life of servitude, in misery and solitude,
Poor William Habron would have lived and died in a
gaol

We know he fervently did pray that he might five to
see the day.
When this dark cloud would pass away and the mur-
derer be found.
He's had to suffer years of pain, although he never did
complain,
He only wanted to clear his name to alibis friends a-
round,
The evidence it was not clear, but ft nearly cost him
life so dear.
The gallows to him it seem'd so near tho was prepared
la die;
Was it not a dreadful shams to brand him with a
murderers name,
And send him away from home and friends, in a convict
gaol to lie.

No one knows but those who feel the pressure of the.
tyrants heel,
Which every day and hoar reveals in Penal Servitude;
Charles Peace; as you do know, would rattier die than
he would go,
The gallows did no terrors show, like that fearful
So itude;
Many a man is suffering there, in misery and dark
despair
Who perhaps had never had a share, in what he's sent
there for,
Tis' hard to be in such & place, A to have the name of
such disgrace.
Like innocent William; Habron, whose troubles now
are e'ee.

Charles Peace the burglar done his best to relleve poor
Habron so opprest,
Tho wrong he done he has redressed and got him free
once more,
Bat the troubles that he has gone though, and the
slavery work he's had to do;
The conſinement he's been subject to, who's to pay
him for.
Sent away oa this pretence, of comfort robbed in every
sense,
He ought to have some recompence, to fill his heart
with joy,
A hundred pound* they should pay down, the people
say in every town:
For the cruel false imprisonment, of a poor Irish boy.

LINES ON THE SAD FATE

The scaffold nor has clone its duty,
And sent a murderer from this world,
Cha les Peace he bar been executed.
And to eternity Is hurled.
On the 26th of February,
Upon the drop Charles Peace did stand
To be sent before bis heavenly Maker,
For breaking of the Lord's cemmand.

For the murder of Mr. Dyson,
Oharles Peace has met an awful doom
And his career at length has ended,

He sleeps for ever in a felons tom').
He made a fail and free confession,
When he found his guilt was known,
That his crime so sad and cruel
Upon his trial was clearly shown.
He had no mercy for his victim,
And none to him the judo could g've
He had disgraced the name of man,
And was no longer fit to live.

Day and flight ho has been guarded,
By the warders in his cell,
As each lonely day departed,
With fear of death his courage fell,
He's been a burglar and a murderer,
But his career it now is run,
At Armley he was executed
Arid suffered for the deeds he's done.

From his cell out to the scaffold;
Thro' the chilly morning air,
The Bannereross murderer was con
ducted,
And looked a picture of sad despair,
His sad career was quickly ended,
As the fatal bolt was drawn,
Beneath his feet the drop descended,
And Charles Peace died a death of
scorn.

There's never been bis equal in defying of the law,
The detectives he used to laugh to scorn,
His wild career is over he cannot rob no more,
It were better that he never had been born,
A bold ingenious man, it always was his plan,
To plunder people for ill-gotten gain,
Had he used the gifts God gave him like an honest man
His character would never had a stain.

The murder of Mr. Dyson, there is no one can defend,
Life is sweet to everyone we know ;
He had no cause to bring his victims life unto an end,
We have ut his love for Mrs Dyson he would show,
no right to jndge, hut every one must say
That perhaps the murderer was not ail to blame
But he has had to suffer the fruits of being gay,
And on the gallows died a death of shame.

With courage so determined no man ever knew,
When travelling down to Sheffield on the fine,
The window of the express train the conviet he leap'd
through
Hoping that his life he could resign.
His time it had not come, his race it was not run,
Tho' bleeding from the wounds upon his head
On the line they saw him lying, Charles Peace was
nearly dying.
And in his heart he wished that he was dead.

On more than one occasion he has boldly faught for
life,
With his revolver fastened to Ms hand,
He commenced all his troubles when he forsook bis.
wife,
As all you married women understant,
Neath a dismal beam nf wood, upon the drop he sutbod
A picture of death and misere.
Upon that Tuesday morn. the fatal bolt was drawn,
And Peace was launched into eternity.