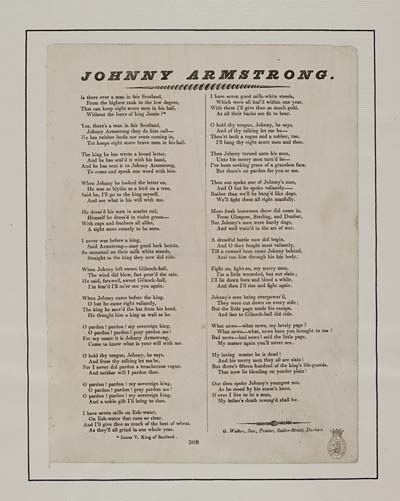 Is there ever a man in fair Scotland,
From the highest rank to the low degree,
That can keep eight score men in his hall,
Without the leave of king Jamie ?*

Yes, there's a man in fair Scotland,
Johnny Armstrong they do him call—
He has neither lands nor rents coming in,
Yet keeps eight score brave men in his hall.

The king he has wrote a broad letter,
And he has seal'd it with his hand,
And he has sent it to Johnny Armstrong,
To come and speak one word with him.

When Johnny he looked the letter on,
He was as blythe as a bird on a tree,
Said he, I'll go to the king myself,
And see what is his will with me.

He dress'd his men in scarlet red,
Himself he dress'd in violet green—
With caps and feathers all alike,
A sight most comely to be seen.

I never was before a king,
Said Armstrong—may good luck betide,
So mounted on their milk white steeds,
Straight to the king they now did ride.

When Johnny came before the king,
O but he came right valiantly,
The king he mov'd the hat from his head,
He thought him a king as well as he.

O hold thy tongue, Johnny, he says,
And from thy talking let me be,
For I never did pardon a treacherous rogue,
And neither will I pardon thee.

I have seven mills on Esk-water,
On Esk-water that runs so clear,
And I'll give thee as much of the best of wheat,
As they'll all grind in one whole year.

I have seven good milk-white steeds,
Which were all foal'd within one year,
With them I'll give thee as much gold,
As all their backs are fit to bear.

O hold thy tongue, Johnny, he says,
And of thy talking let me be—
Thou'rt both a rogue and a robber, too,
I'll hang thy eight score men and thee.

Then Johnny turned unto his men,
Unto his merry men turn'd he—
I've been seeking grace of a graceless face,
But there's no pardon for you or me.

Then out spoke one of Johnny's, men,
And O but he spoke valiantly—
Rather than we'll be hang'd like dogs,
We'll fight them all right manfully.

More fresh horsemen there did come in,
From Glasgow, Sterling, and Dunbar,
But Johnny's men were hardy dogs,
And well train'd in the art of war.

A dreadful battle now did begin,
And O they fought most valiantly,
Till a coward loun came Johnny behind,
And run him through his fair body.

Fight on, fight on, my merry men,
I'm a little wounded, but not slain ;
I'll lie down here and bleed a while,
And then I'll rise and fight again.

Johnny's men being overpower'd,
They were cut down on every side ;
But the little page made his escape,
And fast to Gilnock-hall did ride.

What news—what news, my lovely page ?
What news—what, news have you brought to me ?
Bad news—bad news ! said the little page,
My master again you'll never see.

My loving master he is dead !
And his merry men they all are slain !
But there's fifteen hundred of the king's life-guards,
That now lie bleeding on yonder plain !

Out then spoke Johnny's youngest son,
As he stood by his nurse's knee,
If ever I live to be a man,
My father's death reveng'd shall be.