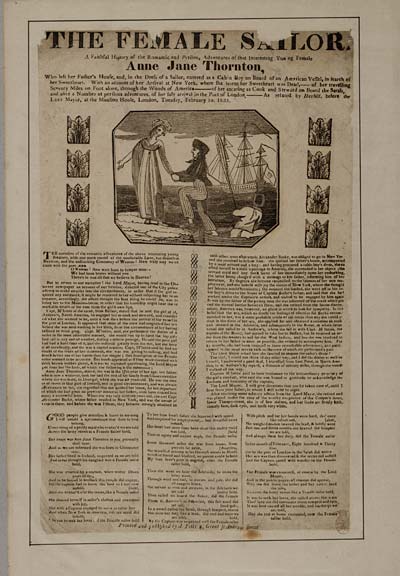 A Faithful History of the Romantic and Perilons, Adventures of that Interesting Young Female

Who left her Father's Houſe, and, in the Dreſs of a Sailor, entered as a Cabin Boy on Board of an American Veſſel, in ſearch of
her Sweetheart. With an account of her Arrival at New York, where ſhe learnt her Sweetheart was Dead, —— of her travelling
Seventy Miles on Foot alone, through the Woods of America——of her entering as Cook and Steward on Board the Sarah,
and after a Number of perilous adventures, of her ſafe arrival in the Port of London——As related by Herſelf, before the
Lord Mayor, at the Manſion Houſe, London, Tuesday, February 10, 1886.

THE narrative of the romantic adventures of the above interesting young
creature, adds one mere record of the unalterable Love, the dauntless
Heroism, and the unflinching Constancy of Woman How truly may we ex
claim with the poet ,***
O Woman ! thou wert born to temper man
We had been brutes without you
There's in you all that we believe in Heaven !

But to return to our narrative the Lord Mayor, having read in the Ob-
server newspaper an account of our heroine, directed one of the City police
officers to make enquiry into the circumstances, in order that if the girl re-
quired any assistance, it might be rendered to her without subjecting her to an
noyance, accordingly, the officer thought the best thing he could do, was to
bring her to the Mansion-house, in order that his Lordship might hear the re
markable details of the case from the girl's own lips,

Capt, M'Intire of the sarah, from Belfast, stated that he met the girl at st,
Andrew's, North America, he engaged her as cook and steward, and consider
'd what she seemed to be, until a few days before the arrival of the vessel in
the port of London, It appeared that some of the crew had suspected her sex
before she was seen washing in her birth, from the circumstance of her having
refused to drink grog. Capt. M'Intire, said, she performed the duties of a
sailor in the most admirable manner, she would run up to hand the top gal-
land sail in any sort of weather, during a severe passage, He said the poor girl
lad had a hard time of it, and she suffered greatly from the wet, but she bore
it all excellently, and she was a capital seaman. Capt, M'Intire said he had no
doubt of the truth of her statement, she was not giving to talking, and had
much better use of her hands than her tongue ; this description of the Female
sailor seemed to be accurate. Her hands appeared as if they were covered with
thick brown leather gloves, & it was by repeated questioning, the Lord Mayor
for from her the facts, of which the following is the substance ;

Anne Jane Thornton, stated, she was in the 17th year of her age, her father
who is now a widower, took her and the rest of his family from Gloucestershire
where she was born, to Donegal, when she was six years old. He was the own
er of stores in that part of Ireland, and in good circumstances, and was always
affectionate to her, she regretted that she quitted her home, for her departure
of which she had given no previous notice to her father, must have caused him
many a sorrowful hous. When she was only thirteen years old, she met Capt
Alexander Burke, whose father resided in New York, and was the owner of
vessels there, and before she was Fifteen, they became strongly attached to
each other, soon after wards Alexander Burke, was obliged to go to New Yor
and she resolved to follow him. she quitted her father's house, accompanied
by a maid servant and a boy : and having procured a cabin boy's dress, sheex
erted herself to obtain a passage to America, she succeeded in her object ;the
servant maid and boy took laeve of her immediately upon her embarking,
the latter being charged with a message to her father, informing him of her
intention, By degrees she became reconciled to the labours of her new em-
ployment, and she beheld with joy the shores of New York, where she thought
her labours would terminate ; the moment she landed, she went off in her ca-
bin boy's dress to the house of Captain Burke's father, and said that she had
worked under the Captain's orders, and wished to be engaged by him again
It was by the father of the young man she was informed of the event which pla-
ced the eternal barrier between them, and she retired from the house discon-
solate, America was, however, no place in which to look for sympathy. In the
belief that the sea, which no doubt her feelings of affection for Burke recom-
mended to her, was a more probable mode of existence than any she could a-
dopt in the dress of her sex, she applied for and obtained a situation as cook
and steward in the Adelaide, and subsequently in the Rover, in which latter
vessel she sailed to St. Andrew's, where she fell in with Capt. M Intire, the
captain of the Rover, had agreed to take her to Belfast, but he received an or-
der from the owners to sail for the West Indies, and has she was resolved to
return to her father as soon as possible, she refused to accompany him. For
3, months, she had been engaged in these remarkable adventures, and parti-
cipated in the most severe toils as the crew of which she performed a part

The Lord Mayor asked how she fancied to assume the sailor's dress ?

The Girl, I could not think of any other way, and I did the duties as well as
I could, I underwent a good deal, I travelled from East Point, in North Ame
rica, to st. Andrew's by myself, a distance of seventy miles, through the woods
I walked all the way.

Captain M'Intire said he bore testimony to the extraordinary propriety of
the girl's conduct, who said she was bound to gratitude to acknowledge the
kindness and humanity of the captain,

The Lord Mayor. I will give directions that you be taken care of, until I
hear from your father, to whom I will write to night.

After receiving some salutary advice from the Lord Mayor, she retired and
was placed under the care of the worthy proprietor of the Cooper's Arms,
lower Thames-street, she is of low stature, and her limbs are firmly knit,
comely face, dark eyes, and teeth very white.