Public are respectfully informed, that there is now performing daily, from twelve to three o'clock, at the City Chambers, a new and most attractive pantomimical tragi-comedy, called Forlorn Hope, alias the life and death of Toryism, alias Chrononhoton 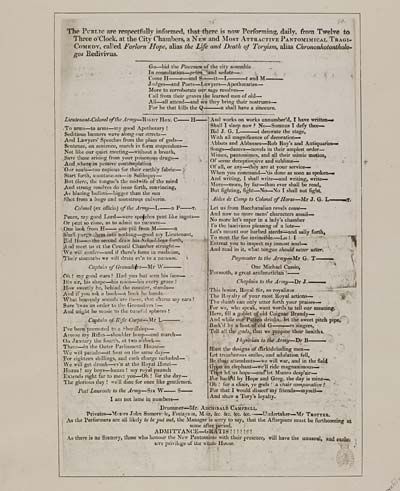 The PUBLIC are respectfully informed, that there is now Performing, daily, from Twelve to
Three o'Clock, at the City Chambers, a NEW and MOST ATTRACTIVE PANTOMIMICAL TRAGI-
COMEDY, called Forlorn Hope, alias the Life and Death of Toryism, alias Chrononhotontholo-
gos Redivivus.

Call from their graves the learned men of old—
All—all attend—and see they bring their nostrums—
For he that kills the Q—n shall have a sinecure.

To arms—to arms—my good Apothecary !
Seditious banners wave along our streets—
And Lawyers' Speeches from the place of gods—
Sentence, on sentence, march in form stupendous—
Not like our quiet meeting—without a breath,
Save those arising from your poisonous drugs—
And where in pensive contemplation
Our souls—too copious for their earthly fabric—
Start forth, spontaneous—in Soliloquy—
But there, the tongue's the midwife of the mind
And strong resolves do issue forth, convincing,
As blazing bullets—bigger than the sun
Shot from a huge and monstrous culverin.

Peace, my good Lord—were spetches pent like ingots—
Or pent so close, as to admit no vacuum—
One look from H——one pill from M——n
Shall purge them into nothing—good my Lieutenant,
Bid H— the second draw his School-boys forth,
And meet us at the Council Chamber straight—
We will confer—and if there's force in medicine,
Their stomachs we will drain ev'n to a vacuum.

Oh ! my good stars ! Had you but seen his face—
His air, his shape—his mien—his every grace !
How sweetly he, behind the counter, stands—
And if you ask a book—a book he hands.
What heavenly sounds are these, that charm my ears !
Sure 'twas an order to the Grenadiers !—
And mlight be music to the tuneful spheres !

I've been promoted to a Sheriffship—
Arouse my Rifles—shoulder hoop—and march—
On January the fourth, at two o'clock—
There—in the Outer Parliament House—
We will parade—at four on the same day—
For eighteen shillings, and each charge included—
We will get drunk—ev'n at the Royal Hotel—
Huzza ! my boys-huzza ! my royal paunch
Extends right far to meet you—Oh ! for the day—
The glorious day ! we'll dine for once like gentlemen.

I am not lame in numbers—

And works on works unnumbered, I have written-
Shall I sleep now ? No—Somnus I defy thee—
Bid J. G. L—t decorate the stage,
With all magnificence of decoration—
Abbots and Abbesses—Rob Roy's and Antiquaries—
Songs—dances—novels in their amplest order—
Mimes, pantomimes, and all their mimic motion,
Of scene deceptiovsive and sublime—
Of all, or any—they are at your service—
When you command—'tis done as soon as spoken—
And writing, I shall write—and writing, write—
More—more, by far—than ever shall be read,
But fighting, fight—No—No I shall not fight.

Let us from Bacchanalian revels cease—
And now no more mens' characters assail—
No more let's caper in a lady's chamber
To the lascivious pleasing of a lute—
Let's mount our barbed steeds—and sally forth,
To meet the foe invincible—Lo ! I
Entreat you to inspect my inmost soul—
And read in it, what tongue should never utter.

Chaplain to the Army—Dr J.——

This honor , Royal Sir, so royalizes
The Royalty of your most Royal actions—
The dumb can only utter forth your praises—
For we, who speak, want words to tell our meaning.
Here, fill a goblet of old Coignac Brandy—
And while our Patron drinks, let the sweet pitch pipe,
Back'd by a host of old G ——rs singers,
Tell all the gads, that we propine their healths.

Physician to the Army—Dr B——

Blast the designs of dark-deluding men—
Let treacherous smiles, and adulation fell,
Be their attendants—we will war, and in the field
Upon an elephant—we'll ride magnanimous—
Then let us hope—and let Munro desp'air—
For back'd by Hope and Greg, the day is mine—.
Oh ! for a chair, ye gods ! a chair comparative !
For that I would dissect my friends—myself—
And show a Tory's loyalty.

Privates—Messrs John Somerville, Finlayson, Moir, &c. &c. &c. &c. ——Undertaker—Mr TROTTER.
As the Performers are all likely to be put out, the Manager is sorry to say, that the Afterpiece must be, furthcoming at
some after period.

As there is no Scenery, those who honour the New Pantomime with their presence, will have the unusual, and exclu-
sive privilege of the whole House.