Welcome to the 78th Highlanders 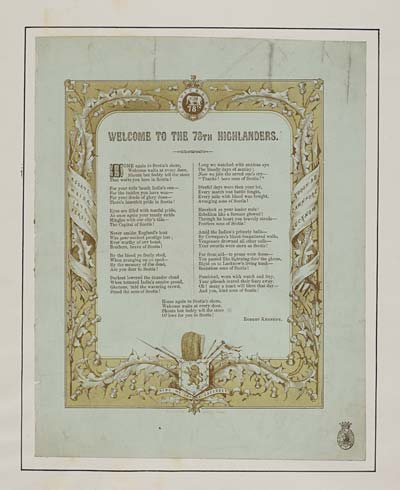 WELCOME TO THE 78th HIGHLANDERS.

HOME again to Scotia's shore,
Welcome waits at every door,
Shouts but feebly tell the store
That waits you here in Scotia !

For your toils 'neath India's sun—
For the battles you have won—
For your deeds of glory done—
There's heartfelt pride in Scotia !

Eyes are filled with tearful pride,
As once again your manly stride
Mingles with our city's tide—
The Capital of Scotia !

Never amidst England's host
Was your ancient prestige lost ;
Ever worthy of our boast,
Brothers, brave of Scotia !

By the blood ye freely shed,
When avenging on ye sped—
By the memory of the dead,
Are you dear to Scotia !

Long we watched with anxious eye
The bloody days of mutiny ;
Now we join the saved one's cry—
" Thanks ! hero sons of Scotia !"

Direful days were then your lot,
Every march was battle fought,
Every mile with blood was bought,
Avenging sons of Scotia !

Havelock as your leader rode !
Rebellion like a furnace glowed !
Through its heart you bravely strode—
Fearless sons of Scotia !

Amid the Indian's princely halls—
By Cawnpore's blood-bespattered walls,
Vengeance drowned all other calls—
Your swords were stern as Scotia !

Far from aid—to pause were doom—
You passed like lightning thro' the gloom
Right on to Lucknow's living tomb—
Resistless sons of Scotia !

Famished, worn with watch and fray,
Your pibroch scared their fears away.
Oh ! many a heart will bless that day—
And you, kind sons of Scotia !

Home again to Scotia's shore,
Welcome waits at every door,
Shouts but feebly tell the store
Of love for you in Scotia !