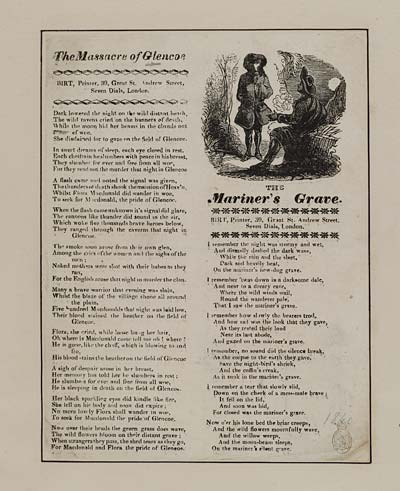 The Massacre of Glencoe

Dark lowered the night on the wild distant heath,
The wild ravens cried on the banners of death,
While the moon hid her beams in the clouds out
of woe,
She disdained for to gaze on the field of Glencoe.

In sweet dreams of sleep, each eye closed in rest,
Each cheiftain he slumbers with peace in his breast,
They slumber for ever and free from all woe,
For they read not the murder that night in Glencoe

A flash came and noted the signal was given,
The thunders of death shook the mansion of Heav'n,
Whilst Flora Macdonald did wander in woe,
To seek for Macdonald, the pride of Glencoe.

When the flash came unknown it's signal did glare,
The cannons like thunder did sound in the air,
Which woke five thousands brave heroes below,
They ranged through the caverns that night in
Glencoe.

The smoke soon arose from their own glen,
Among the cries of the women and the sighs of the
men ;
Naked mothers were shot with their babes as they
ran,
For the English arose that night to murder the clan.

Many a brave warrior that evening was slain,
Whilst the blaze of the village shone ail around
the plain,
Five hundred Macdonalds that night was laid low,
Their blood stained the heather on the field of
Glencoe.

Flora, she cried, while loose hung her hair,
Oh where is Macdonald come tell me oh ! where ?
He is gone, like the chaff, which is blowing to and
fro,
His blood stains the heather on the field of Glencoe

A sigh of despair arose in her breast,
Her memory has told her he slumbers in rest ;
He slumbers for ever and free from all woe,
He is sleeping in death on the field of Glencoe.

Her black sparkling eyes did kindle like fire,
She tell on his body and soon did expire ;
No more lovely Flora shall wander in woe,
To seek for Macdonald the pride of Glencoe.

Now over their heads the green grass does wave,
The wild flowers bloom on their distant grave ;
When strangers they pass, the shed tears as they go,
For Macdonald and Flora the pride of Glencoe.

I remember the night was stormy and wet,
And dismally dashed the dark wave,
While the rain and the sleet,
Dark and heavily beat,
On the mariner's new-dug grave.

I remember 'twas down in a darksome dale,
And near to a dreary cave,
Where the wild winds wail,
Round the wanderer pale,
That I saw the mariner's grave.

I remember how slowly the bearers trod,
And how sad was the look that they gave,
As they rested their load
Near its last abode,
And gazed on the mariner's grave.

I remember, no sound did the silence break,
As the corpse to the earth they gave,
Save the night-bird's shriek,
And the coffin's creak,
As it sunk in the marine's grave.

I remember a tear that slowly slid,
Down on the cheek of a mess-mate brave ;
It fell on the lid,
And soon was hid,
for Closed was the mariner's grave.