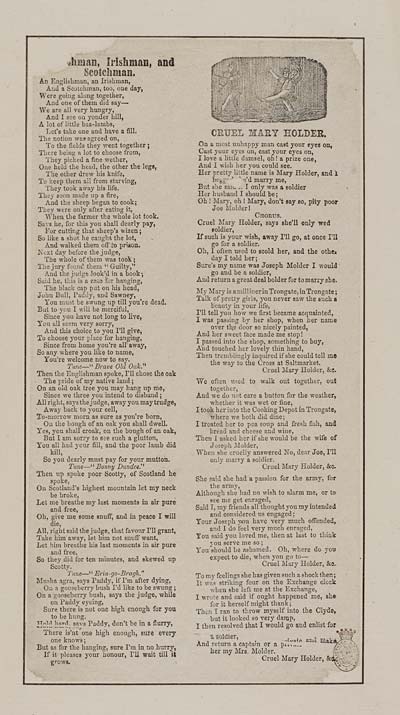 An Englishman, an Irishman,
And a Scotchman, too, one day,
Were going along together,
And one of them did say—
We are all very hungry,
And I see on yonder hill,
A lot of little baa-lambs,
Let's take one and have a fill.
The notion was agreed on,
To the fields they went together ;
There being a lot to choose from,
They picked a fine wether,
One held the head, the other the legs,
The other drew his knife,
To keep them all from starving,
They took away his life.
They soon made up a fire,
And the sheep began to cook ;
They were only after eating it,
When the farmer the whole lot took.
Says he, for this you shall dearly pay,
For cutting that sheep's wizen ;
So like a shot he caught the lot,
And walked them off to prison.
Next day before the judge,
The whole of them was took ;
The jury found them " Guilty,"
And the judge look'd in a book ;
Said he, this is a case for hanging,
The black cap put on his head,
John Bull, Paddy, and Sawney,
You must be swung up till you're dead.
But to you I will be merciful,
Since you have not long to live,
You all seem very sorry,
And this choice to you I'll give,
To choose your place for hanging,
Since from home you're all away,
So any where you like to name,
You're welcome now to say.
Tune—" Brave Old Oak."
Then the Englishman spoke, I'll chose the oak
The pride of my native land ;
On an old oak tree you may hang up me,
Since we three you intend to disband ;
All right, says the judge, away you may trudge,
Away back to your cell,
To-morrow morn as sure as you're born,
On the bough of an oak you shall dwell.
Yes, you shall croak, on the bough of an oak,
But I am sorry to see such a glutton,
You all had your fill, and the poor lamb did
kill,
So you dearly must pay for your mutton.
Tune—" Bonny Dundee."
Then up spoke poor Scotty, of Scotland he
spoke,
On Scotland's highest mountain let my neck
be broke,
Let me breathe my last moments in air pure
and free,
Oh, give me some snuff, and in peace I will
die,
All, right said the judge, that favour I'll grant,
Take him away, let him not snuff want,
Let him breathe his last moments in air pure
and free,
So they did for ten minutes, and skewed up
Scotty.
Tune—" Erin-go-Bragh."
Musha agra, says Paddy, if I'm after dying,
On a gooseberry bush I'd like to be swung ;
On a gooseberry bush, says the judge, while
on Paddy eyeing,
Sure there is not one high enough for you
to be hung.
Hold bard says Paddy, don't be in a flurry,
There is'nt one high enough, sure every
one knows ;
But as for the hanging, sure I'm in no hurry,
If it pleases your honour, I'll wait till it
grows.

Cruel Mary Holder, says she'll only wed
soldier,
If such is your wish, away I'll go, at once I'll
go for a soldier.
Oh, I often used to scold her, and the other
day I told her ;
Sure's my name was Joseph Molder I would
go and be a soldier,
And return a great deal bolder for to marry she.

My Mary is a milliner in Trongate, in Trongate ;
Talk of pretty girls, you never saw the such a
beauty in your life,
I'll tell you how we first became acquainted,
I was passing by her shop, when her name
over the door so nicely painted,
And her sweet face made me stop !
I passed into the shop, something to buy,
And touched her lovely thin hand,
Then tremblingly inquired if she could tell me
the way to the Cross at Saltmarket.
Cruel Mary Holder, &c.

We often used to walk out together, out
together,
And we do not care a button for the weather,
whether it was wet or fine,
I took her into the Cooking Depot in Trongate,
where we both did dine ;
I treated her to pea soup and fresh fish, and
bread and cheese and wine,
Then I asked her if she would be the wife of
Joseph Molder,
When she cruelly answered No, dear Joe, I'll
only marry a soldier.
Cruel Mary Holder, &c.

She said she had a passion for the army, for
the army,
Although she had no wish to alarm me, or to
see me get enraged,
Said I, my friends all thought you my intended
and considered us engaged ;
Your Joseph you have very much offended,
and I do feel very much enraged,
You said you loved me, then at last to think
you serve me so ;
You should be ashamed. Oh, where do you
expect to die, when you go to—
Cruel Mary Holder, &c.

To my feelings she has given such a shock then ;
It was striking four on the Exchange clock
when she left me at the Exchange,
I wrote and said if ought happened me, she
for it herself might thank ;
Then I ran to throw myself into the Clyde,
but it looked so very damp,
I then resolved that I would go and enlist for
a soldier,
And return a captain or a p and make
her my Mrs, Molder.
Cruel Mary Holder, &c.