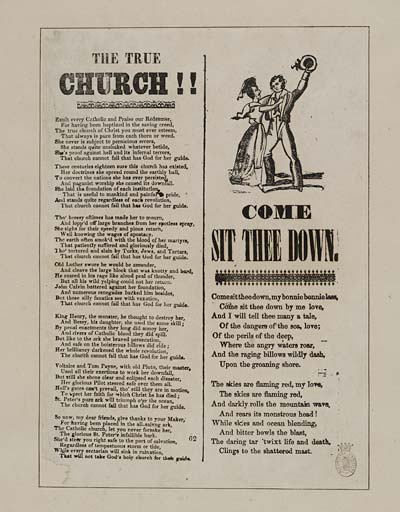 Exult every Catholic and Praise our Redeemer,
For having been baptized in the saving creed,
The true church of Christ you must ever esteem,
That always is pure from each thorn or weed.
She never is subject to pernicious errors,
She stands quite unshaked whatever betide,
She's proof against hell and its infernal terrors,
That church cannot fail that has God for her guide.

These centuries eighteen sure this church has existed,
Her doctrines she spread round the earthly ball,
To convert the nations she has ever persisted,
And paganist worship she caused its downfall.
She laid the foundation of each institution,
That is useful to mankind and painful pride,
And stands quite regardless of each revolution,
That church cannot fail that has God for her guide.

Tho' heresy oftimes has made her to mourn,
And lopp'd off large branches from her spotless spray,
She sighs for their speedy and pious return,
Well knowing the wages of apostacy.
The earth often smok'd with the blood of her martyrs,
That patiently suffered and gloriously died,
Tho' tortured and slain by Turks, Jews, and Tartars,
That church cannot fail that has God for her guide.

Old Luther swore he would be assunder,
And cleave the large block that was knotty and hard,
He roared in his rage like aloud peal of thunder,
But all his wild yelping could not her return.
John Calvin battered against her foundation,
And numerous renegades backed him besides,
But those silly fanatics see with vexation,
That church cannot fail that has God for her guide.

King Henry, the monster, he thought to destroy her,
And Bessy, his daughter, she used the same skill ;
By penal enactments they long did annoy her,
And rivers of Catholic blood they did spill.
But like to the ark she braved persecution,
And safe on the boisterous billows did ride ;
Her brilliancy darkened the whole revolution,
The church cannot fail that has God for her guide.

Voltaire and Tom Payne, with old Pluto, their master,
Used all their exertions to work her downfall,
But still she shone clear and eclipsed each disaster,
Her glorious Pilot steered safe over them all.
Hell's gates can't prevail, tho' still they are in motion,
To upset her faith for which Christ he has died ;
St. Peter's pure ark will triumph o'er the ocean,
The church cannot fail that has God for her guide.

So now, my dear friends, give thanks to your Maker,
For having been placed in the all-saivng ark,
The Catholic church, let you never forsake her,
The glorious St. Peter's infallible bark.
She'd steer you right safe to the port of salvation,
Regardless of tempestuous storm or tide,
While every sectarian will sink in ruination,
That will not take God's holy church for then guide.

Come sit thee down, my bonnie bonnie lass,
Came sit thee down by me love,
And I will tell thee many a tale,
Of the dangers of the sea, love;
Of the perils of the deep,
Where the angry waters roar,
And the raging billows wildly dash,
Upon the groaning shore.