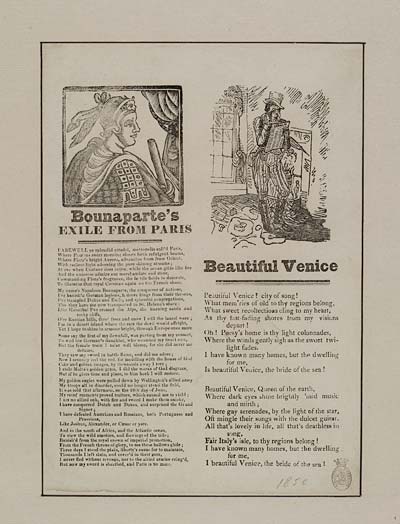 FAREWELL ye splendid citadel, metropolis call'd Paris,
Where Phœhus every morning shoots forth refulgent beams,
Where Flora's bright Aurora, advancing from from Orient,
With radient light adorning the pure shining streams ;
At eve when Centaur does retire, while the ocean gilds like tire
And the universe admire our merchandize and store,
Commanding Flora's fragrance, the ſe tile fields to decorate,
To illumine that royal Corsican again on the French shore.
My name's Napoleon Bounaparte, the conqueror of nations,
I've banish'd German legions, & drove kings from their thrones,
I've trampled Dukes and Earls, and splendid congregations,
Tho they have me now transported to St. Helena's shore :
Like Hannibal I've crossed the Alps, the burning sands and
rocky cliffs,
O'er Russian hills, thro' frost and snow I still the laurel wore ;
I'm in a desert island where the rats the devil would affright,
Yet I hope to shine in armour bright, through Europe once more
Some say the first of my downfall, was parting from my consort,
To wed the German's daughter, who wounded my heart sore,
But the female train I ne'er will blame, for she did never me
deſame,
They saw my sword in battle flame, and did me adore ;
Now I severely feel the rod, for meddling with the house of God
Coin and golden images, by thousands away I tore ;
I stole Malta's golden gates, I did the works of God disgrace,
But if he gives time and place, to him back I will restore.

My golden eagles were pulled down by Wellington's allied army
My troops all in disorder, could no longer stand the field,
It was sold that afternoon, on the 18th day of June,
My reinf rcements proved traitors, which caused me to yield ;
I am no allied oak, with fire and sword I make them smoke,
I have conquered Dutch and Danes, and surprised the Grand
Signor ;
I have defeated Austrians and Russians, both Portuguese and
Prussians,
Like Joshua, Alexander, or Cæsar or yore.

And to the south of Africa, and the Atlantic ocean,
To view the wild emotion, and flowings of the tide ;
Banish'd from the royal crown of imperial promotion,
From the French throne of glory, to see those bellows glide ;
Three days I stood the plain, liberty's cause for to maintain,
Thousands I left slain, and cover'd in their gore,
I never fled without revenge, nor to the allied armies cring'd,
But now my sword is sheathed, and Paris is no more.

Beautiful Venice ! city of song !
What mem'ries of old to thy regions belong,
What sweet recollections cling to my heart,
As thy fast-fading shores from my visions
depart !
Oh ! Poesy's home is thy light colonnades,
Where the winds gently sigh as the sweet twi-
light fades.
I have known many homes, but the dwelling
for me,
Is beautiful Venice, the bride of the sea !

Beautiful Venice, Queen of the earth,
Where dark eyes shine brightly 'mid music
and mirth ;
Where gay serenades, by the light of the star,
Oft mingle their songs with the dulcet guitar.
All that's lovely in life, all that's deathless in
song,
Fair Italy's isle, to thy regions belong !
I have known many homes, but the dwelling
for me,
I beautiful Venice, the bride of the sea !