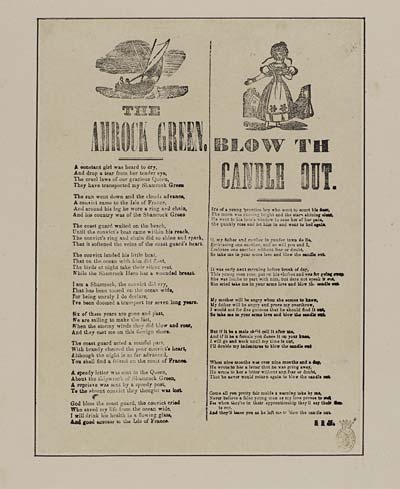 A constant girl was heard to cry,
And drop a tear from her tender eye,
The cruel laws of our gracious Queen,
They have transported my Shamrock Green

The sun went down and the clouds advance,
A convict came to the Isle of France,
And around his leg he wore a ring and chain,
And his country was of the Shamrock Green

The coast guard waited on the beach,
Until the convict's boat came within his reach,
The convict's ring and chain did so shine and spark,
That it softened the veins of the coast guard's heart.

The convict landed his little boat,
That on the ocean with him did float,
The birds at night take their silent rest,
While the Shamrock Hero has a wounded breast.

I am a Shamrock, the convict did cry,
That has been tossed on the ocean wide,
For being unruly I do declare,
I've been doomed a transport for seven long years.

Six of those years are gone and past,
We are sailing to make the last,
When the stormy winds they did blow and roar,
And they cust me on this foreign shore.

The coast guard acted a manful part,
With brandy cheered the poor convict's heart,
Although the night is so far advanced,
You shall find a friend on the coast of France.

A speedy letter was sent to the Queen,
About the shipwreck of Shamrock Green,
A reprieve was sent by a speedy post,
To the absent convict they thought was lost.

God bless the coast guard, the convict cried
Who saved my life from the ocean wide,
I will drink his health in a flowing glass,
And good success to the Isle of France.

It's of a young prentice boy who went to court his dear,
The moon was shining bright and the stars shining clear,
He west to his love's window to case her of her pain,
She quickly rose and let him in and went to bed again

O, my father and mother in yonder town do Ile,
Embracing one another, and so will you and I,
Embrace one another without fear or doubt,
So take me in your arms love and blow the candle out.

It was early next morning before break of day,
This young man rose, put on his clothes and was for going
She was loathe to part with him, but dare not speak it out,
She cried take me in your arms love and blow the candle out.

But if It be a male child call it after me,
And if it be a female yon dance it on your k ,
I will go and work until my time is out,
I'll double my indentures to blow the candle out.

Come all you pretty fair maids a warning take by me,
Never believe a false young man as my love proves to
For when they're is their apprenticeship they'll say their
is out.
And they'll leave you as be left me to blow the candle out.