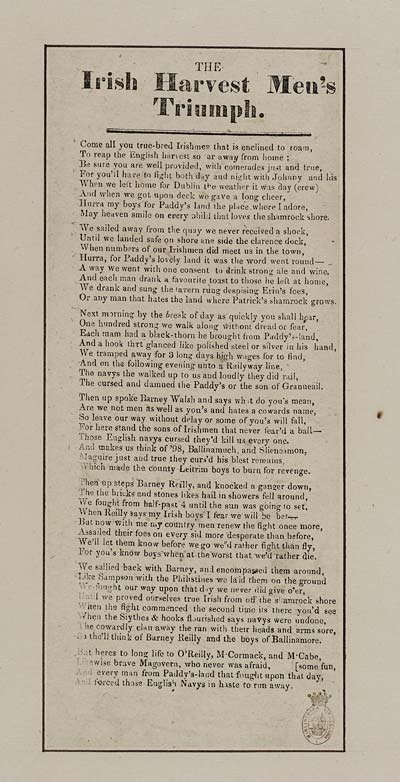 Come all you true-bred Irishmen that is enclined to roam,
To reap the English harvest so ar away from home ;
Be sure you are well provided, with comerades just and true,
For you'll have to fight both day and night with Johnny and his
When we left home for Dublin the weather it was day (crew)
And when we got upon deck we gave a long cheer,
Hurra my boys for Paddy's land the place where I adore,
May heaven smile on every child that loves the shamrock shore.

We sailed away from the quay we never received a shock,
Until we landed safe on shore ane side the clarence dock,
When numbers of our Irishmen did meet us in the town,
Hurra, for Paddy's lovely land it was the word went round—
A way we went with one consent to drink strong ale and wine,
And each man drank a favourite toast to those he left at home,
We drank and sung the lavern rung despising Erin's foes,
Or any man that hates the land where Patrick's shamrock grows.

Next morning by the break of day as quickly you shall hear,
One hundred strong we walk along withont dread or fear,
Each mam had a black-thorn he brought from baddy's-land,
And a hook thtt glanced like polished steel or silver in his hand,
We tramped away for 3 long days high wages for to find,
And on the following evening unto a Railyway line,
The navys the walked up to us and loudly they did rail,
The cursed and damned the Paddy's or the son of Granueail.

Then up spoke Barney Walsh and says what do you's mean,
Are we not men as well as you's and hates a cowards name,
So leave our way without delay or some of you's will fall,
For here stand the sons of Irishmen that never fear'd a ball—
Those English navys cursed they'd kill us every one.
And makes us think of '98, Ballinamuch, and Slieneamon,
Maguire just and true they curs'd his blest remains,
Which made the county Leitrim boys to burn for revenge.

Then up steps Barney Reilly, and knocked a ganger down,
The the bricks and stones likes hail in showers fell around,
We fought from half-past 4 until the sun was going to set,
When Reilly says my Irish boys I fear we will be bet—
But now with me my country men renew the fight once more,
Assailed their foes on every sid more desperate than before,
We'll let them know before we go we"d rather fight than fly,
For you's know boys when at the worst that we'd rather die.

We sallied back with Barney, and encom passed them around,
Like Sampson with the Philistines we laid them on the ground
We fought our way upon that day we never did give o'er,
Until we proved ourselves true Irish from off the shamrock shore
When the fight commenced the second time its there you'd see
When the Siythes & hooks flourished says navys were undone,
The cowardly clan away the ran with their heads and arms sore,
So the'll think of Barney Reilly and the boys of Ballinamore.

But heres to long life to O'Reilly, M'Cormack, and M'Cabe,
Likewise brave Magovern, who never was afraid, [some fun,
And every man from Paddy's-land that fought upon that day,
And forced those English Navys in haste to run away.