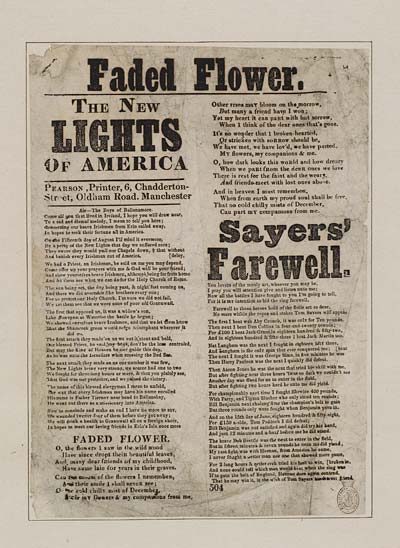 THE NEW
LIGHTS
OF AMERICA

Air—The Boys of Ballanamore.
Come all you that lived in Ireland, I hope you will draw near,
To a sad and dismal melody, I mean to tell you here ;
Concerning our brave Irishmen from Erin sailed away,
In hopes to seek their fortune all in America.

On the Fifteenth day of August I'll mind it evermore,
By a party of the New Lights that day we suffered sore ;
They swore they would pull our Chapels down, & that without
And banish every Irishman eut of America.                    [delay,

We had o Priest, an Irishman, he said on me you may depend,
Come offer up your prayers with me & God will be your friend ;
And shew yourselves brave Irishmen, although being far from home
And let them see what we can do for the Holy Church of Rome.

The sun being set, the day being past, & night fast coming on,
And there we did assemble like brothers every one ;
For to protect our Holy Church, I'm sure we did not fail,
We Let them see that we were sons of poor old Granuwail.

The first that opposed us, it was a widow's son,
Like Bonypart at Waterloo the battle he begun;
We showed ourselves brave Irishmen, and that we let them know
That the Shamrock green would reign triumphant wherever it
diid go.

The first attack they made on as we cut it stout and bold,
Our blessed Priest, he said, my boys, don't be the leas controled,
But may the King of Heaven be our guide this day,
As he was unto the Israelites when crossing the Red Sea.

The next attack they made on us our number it was few,
The New Lights being very strong, we scarce had one to two
We fought for three long hours or more, & that you plainly see,
That God was our protector, and we gained the victory.

The name of this blessed clergyman I mean to unfold,
The way that every Irishman may have his name enrolled
His name is Father Tierney near hand to Ballanabay,
He went out there as a missionary into America.

Now to conclude and make an end I have no more to say,
We wounded twenty-four of them before they got away ;
We will drink a health to Granuwail all on a foreign shore,
In hopes to meet our loving friends in Erin's Isle once more

O, the flowers I saw in the wild wood
Have since dropt their beautiful leaves,
And many dear friends of my childhood,
Have some lain for years in their graves.

Can moom of the flowers I remember,
And their smile I shall never see ;
O the cold chillY mist of December,
ole my flowers & my companions from me,

Other rrses maY bloom on the morrow, But many a friend have I won :
Yet my heart it can paRt with but sorrow,
When I think of the dear ones that's gone.

It's no wonder that I broken-hearted,
Or stricken with sorrow should be,
We have met, we have lov'd, we have parted,
My flowers, my companions & me.

O, how dark looks this world and how dreary
When we paRt fRom the deaR ones we love
There is rest for the faint and the weary.
And friends meet with lost ones above.

And in heaven I must remembeR,
When from earth my proud soul shall be free,
That no cold chilly mists of December,
Cau part my companions from me.

You lovers of the manly art, whoever you may be,
I pray you will attention give and listen unto me ;
Now all the battles I have fought to you I'm going to tell,
For it is mY intention to bid the ring farewell.

Farewell to those heroes bold of the fistie art so dear,
No more within the ropes and stakes Tom SaYers will appear.

For championship next time I fought likewise 400 pounds,
With Parry, and Tipton Slasher who only stood ten rounds ;
Bill Benjamin next chaleng'd me the champion's belt to gain
But three rounds only were fought when Benjamin yeve in.

And on the 15th day of June, eighteen hundred & fifty-eight,
For £150 a-side, Tom Psddock I did defeat ;
Bill Benjamin was not satisfied and again did try his hand,
And just 12 minutes and a-haLf before me he did stand.

The brave Bob Brettle was the next to enter in the field,
But in fifteen minutes & seven rounds he unto me did yield,
My Last fight was with Heenan, from America he came,
I never fought a better man nor arte that showed more game,

For 2 long hours & qetter erch tried his best to win, [brokenic,
And none could tell which man would beat when the ring was
If to gatn the belt of England, Heenan does again contend,
That he may win it, is the wish of Tom Sayers his dearest friend,