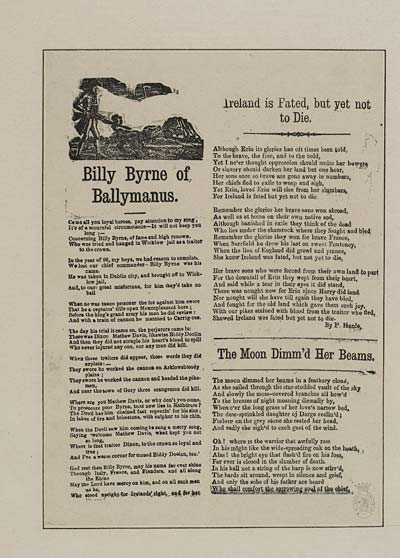 Come all you loyal heroes, pay attention to my song ,
It's of a mournful circumstance—It will not keep you
long ;—
Concerning Billy Byrne, of ſame and high renown,
Who was tried and hanged in Wicklow jail as a traitor
to the crown.

In the year of 98, my boys, we had reason to complain
We lost our chief commander— Billy Byrne was his
name.
He was taken in Dublin city, and brought off to Wick-
low jail,
And, to ourr great misfortune, for him they'd take no
bail

When he was taken prisoner the lot against him swore
That he a captains' title upon Mountpleasant bore ;
Before the king's grand army his men he did review :
And with a train of cannon he marched to Carrig-rue.

The day his trial it came on, the perjurors came in:
There was Dixon Mathew Davis, likewise Biddy Doolin
And then they did not scruple his heart's blood to spill
Who never injured any one, nor any man did kill.

Where are you Mathew Davis, or why don't you come.
To prosecute poor Byrne, that now lies in Rathdrum ?
The Devil has him chained fast repentin' for his sins ;
In lakes of fire and brimstone, with sulphur to his chin.

When the Devil saw him coming he sang a merry song,
Saying 'welcome Mathew Davis, what kept you out
so long,
Where is that traitor Dixon, to the crown so loyal and
true ;
And I've a warm corner for cursed Biddy Doolan, too.'

God rest then Silly Byrne, may his name for ever shine
Through Italy, France, and Flanders, and all along
the Rhine
May the Lord have mercy on him, and on all such man
as he,
Who stood upright for Irelands' right, and for her

Ireland is Fated, but yet not

Although Erin its glories has oft times been told,
To the brave, the free, and to the bold,
Yet I ne'er thought oppression should smite her bowers
Or slavery should darken her land but one hour,
Her sons once so brave are gone away in numbers,
Her chiefs fled to exile to weep and sigh,
Yet Erin, loved Erin will rise from her slumbers,
For Ireland is fated but yet not to die.

Remember the glories her brave sons won abroad,
As well as at home on their own native sod,
Although banished in exile they think of the dead
Who lies under the shamrock where they fought and bled
Remember the glories they won for brave France,
When Sarrfield he drew his last on sweet Fontenoy,
When the lion of England did growl and prance,
She knew Ireland was fated, but not yet to die,

Her brave sons who were forced from their own land to part
For the downfall of Erin they wept from their heart,
And said while a tear in their eyes it did stand,
There was nought now for Erin since Harry did land
Nor nought will she have till again they have bled,
And fought for the old land which gave them such joy,
With our pikes stained with blood from the traitor who fled,
Showed Ireland was fated but yet not to die.

The Moon Dimm'd Her Beams.

The moon dimmed her beams in a feathery cloud,
As she sailed through the star-studded vault of the sky
And slowly the moss-covered branches all bow'd
To the breezes of night moaning dismally by,
When o'er the long grass of her love's narrow bed,
The dew-sprinkled daughter oj Dargo reclin'd ;
Forlorn on the grey stone she rested her head,
And sadly she sigh'd to each gust of the wind.

Oh ! where is the warrior that awfully rose
In his might like the wide-spreading oak on the heath,
Alas ! the bright eye that flash'd fire on his foes,
For ever is closed in the slumber of death.
In his hall not a string of the harp is now stirr'd,
The bards sit around, wrapt in silence and grief,
And only the sobs of his father are heard
Who shall comfort the sorrowing soul of the chief.