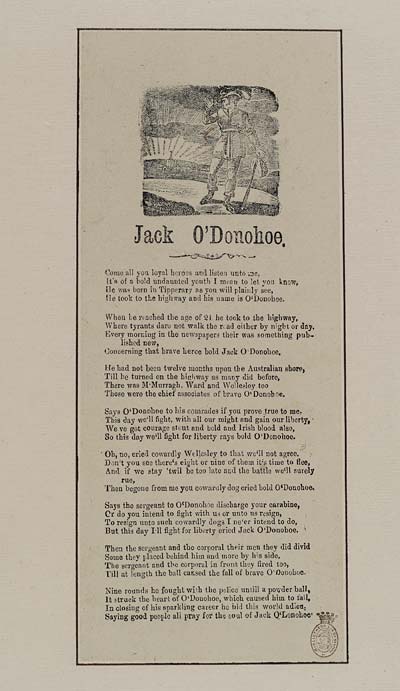 Come all you loyal heroes and listen unto me,
It's of a bold undaunted youth I mean to let you know,
He was born in Tipperary as you will plainly see,
He took to the highway and his name is O'Donohoe.

When he reached the age of 21 he took to the highway,
Where tyrants dare not walk the road either by night or day,
Every morning in the newspapers their was something pub-
lished new,
Concerning that brave heroe bold Jack O'Donohoe.

He had not been twelve months upon the Australian shore,
Till he turned on the highway as many did before,
There was M'Murragh, Ward and Wellesley too
Those were the chief associates of brave O'Donohoe.

Says O'Donohoe to his comrades if you prove true to me,
This day we'll fight, with all our might and gain our liberty,
We ve got courage stout and bold and Irish blood also,
So this day we'll fight for liberty says bold O'Donohoe.

Oh, no, cried cowardly Wellesley to that we'll not agree,
Don't you see there's eight or nine of them it's time to flee,
And if we stay 'twil be too late and the battle we'll surely
rue,
Then begone from me you cowardly dog cried bold O'Donohoe.

Says the sergeant to O'Donohoe discharge your carabine,
Or do you intend to fight with us or unto us resign,
To resign unto such cowardly dogs I ne'er intend to do,
But this day I'll fight for liberty cried Jack O'Donohoe.

Nine rounds he fought with the police untill a powder ball,
It struck the heart of O'Donohoe, which caused him to fall,
In closing of his sparkling career he bid this world adieu,
Saying good people all pray for the soul of Jack O'Lonohoe