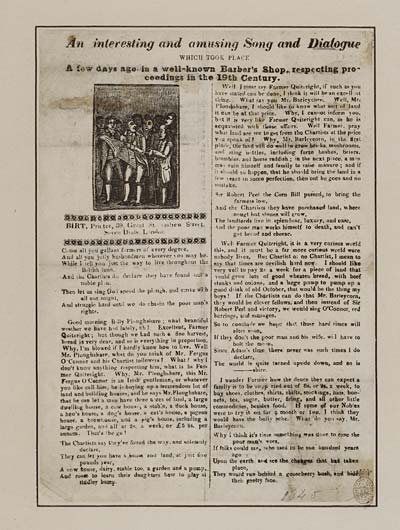 An interesting and amusing Song and Dialogue

A few days age in a well-known Barber's Shop, respecting pro-
ceeding in the 19th Century.

Come all you gallant farmers of every degree,
And all you jolly husbandmen wherever you may be
While I tell you just the way to live throughout the
British land,
And the Chartists do declare they have found out a
noble plan,
Then let us sing Go speed the plough, and strive with
all our might,
And struggle hard until we do obtain the poor map's
rights.

Good morning Billy Ploughshare ; what beantiful
weather we have had lately, eh ! Excellent, Farmer
Quiteright ; but though we had Such a fine harvest,
bread is very dear, and so is everything in proportion.
Why, I'm blowed if I hardly know how to live. Well
Mr. Ploughshare, what do you think of Mr. Fergus
O'Connor and his Chartist followers ? What ! why I
don't know anything respecting him, what is he Far-
mer Quiteright. Why, Mr. Ploughshare, this Mr.
Fergus O'Connor is an Irish gentleman, or whatever
you like call him, he is buying up a tremendous lot of
land and building houses, and he says Mr.Ploughshare,
that he can let a man have three acres of land, a large
dwelling house, a cow house, a stable, a duck house,
a hen's house, a dog's house, a cat's house, a pigeon
house, a brewhouse, and a pig's house, including a
large garden, and all at 2s. a week, or £5 4s. per
annum. That's the go !

The Chartists say they've found the way, and solemnly
declare,
They can let you have a house and land, at just five
pounds year,
A cow house, dairy, stable too, a garden and a pump,
And room to learn their daughters how to play at
tiddley bump.

Well I must say Farmer Quiteright, if such as you
have stated can be done, I think it will be an excellent
thing. What say you Mr. Barleycorn. Well, Mr.
Ploushshare, I should like to know what sort of land
it can be at that price. Why, I cannot inform you,
but it is very like Farmer Quiteright can, as he is
acquainted with those affairs. Well Farmer, pray
what land are we to get from the Chartists at the price
you speak of ! Why, Mr. Barleycorn, in the first
place, the land will do well to grow bricks, mushrooms,
and sting nettles, including furze bushes, briars,
brambles, and horse raddish ; in the next place, a men
may ruin himself and family to raise manure ; and if
it should so happen, that he should bring the land in a
few years to some perfection, then out he goes and no
mistake.

Sir Robert Peel the Corn Bill passed, to bring the
farmers low,
And the Chartists they have purchased land, where
nougt but stones will grow,
The landlords live in splendonr, luxury, and ease,
And the poor man works himself to death, and can't
get bread and cheese.

Well Farmer Quiteright, it is a very curious world
this, and it must be a far more curious world were
nobody lives. But Chartist or no Chartist, I mean to
say that times are devilish hard now. I should like
very well to pay 2s. a week for a piece of land that
would grow lots of good wheaten bread, with beef
steaks and onions, and a large pump to pump up a
good drink of old October, that would be the thing my
boys ! If the Chartists can do that Mr. Barleycorn,
they would be clever fellows, and then instead of Sir
Robert Peel and victory, we would sing O'Connor, red
herrings, and sausages.

So to conclude we hope that those hard times will
alter soon,
If they don't the poor man and his wife, will have to
bolt the moon,
Since Adam's time there never was such times I do
declare,
The world is quite turned upside down, and so is
———shire.

I wonder Farmer how the deuce they can expect a
family is to be supp rted out of 8s. or 9s. a week, to
buy shoes, clothes, shirts, shifts, stockings, hats, bon-
nets, tea, sugar, butter, firing, and all other little
commodities, besides food. If some of our Nobles
were to try it on for a month or two, I think they
would have the belly ache. What do you say, Mr.
Barleycorn.

Why I think it's time something was done to ease the
poor man's woes,
If folks could see, who used to he one hundred years
ago
Upon the earth, and see the changes that has taken
place,
They would run behind a gooseberry bush, and hide
their pretty face.