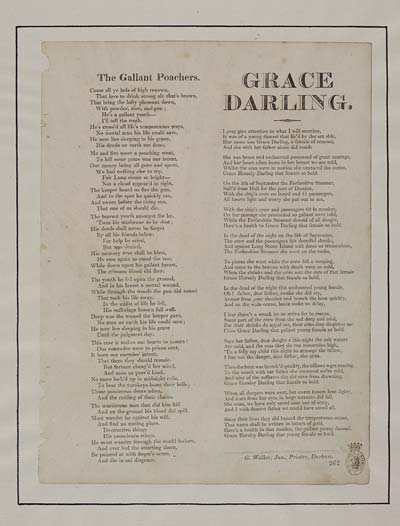 Come all ye lads of high renown,
That love to drink strong ale that's brown,
That bring the lofty pheasant down,
With powder, shot, and gun ;
He's a gallant youth—
I'll tell the truth.
He's cross'd all life's tempestuous ways,
No mortal man his life could save,
He now lies sleeping in his grave,
His deeds on earth are done.

Me and five more a poaching went,
To kill some game was our intent,
Our money being all gone and spent,
We had nothing else to try.
Fair Luna shone so bright—
Not a cloud appear'd in sight.
The keeper heard us fire the gun,
And to the spot he quickly ran,
And swore before the rising sun,
That one of us should die.

The bravest youth amongst the lot,
'Twas his misforune to be shot ;
His deeds shall never be forgot
By all his friends below.
For help he cried,
But was denied.
His memory ever shall be blest,
He rose again to stand the test,
While down upon his gallant breast,
The crimson blood did flow.

The youth he fell upon the ground,
And in his Breast a mortal wound,
While through the woods the gun did sound
That took his life away.
In the midst of life he fell,
His sufferings known full well.
Deep was the wound the keeper gave,
No man on earth his life could save ;
He now lies sleeping in his grave
Until the judgment day.

This case it makes out hearts to mourn !
Our comrades were to prison sent,
It been our enemies' intent,
That there they should remain.
But fortune chang'd her mind,
And unto us prov'd kind.
No more lock'd up in midnight cells,
To hear the turnkeys boast their bells ;
Those ponderous doors adieu,
And the rattling of their chains.

The murderous man that did him kill
And on the ground his blood did spill,
Must wander far against his will,
And find no resting place.
Destructive things
His conscience stings.
He must wander through the world forlorn,
And ever feel the smarting thorn,
Be pointed at with finger's scorn,
And die in sad disgrace.

I pray give attention to what I will mention,
It was of a young damsel that liv'd by the sea side,
Her name was Grace Darling, a female of renown,
And she with her father alone did reside

She was brave and undaunted possessed of great courage,
And her heart often beats in her breast we are told,
Whilst the seas were in motion she ventured the ocean,
Grace Horsely Darling that female so bold.

On the 5th of September the Forfarshire Steamer,
Sail'd from Hull for the port of Dundee,
With the ship's crew on board and 41 passengers,
All hearts light and merry she put out to sea,

With the ship's crew and passengers 60 in number,
On her passage she proceeded so gallant were told,
While the Forfarshire Steamer devoid of all danger,
Here's a health to Grace Darling that female so bold.

In the dead of the night on the 6th of September,
The crew and the passengers felt dreadful shocks,
And against Long Stone Island with force so tremendous,
The Forfarshire Steamer she went on the rocks,

To pieces she went while the crew fell a weeping,
And some to the bottom with death went so cold,
When the shrieks and the cries met the ears of that female
Grace Horsely Darling that female so bold.

In the dead of the night this undaunted young female,
Oh ! father, dear father, awake she did cry,
Arouse from your slumber and launch the boat quickly,
And on the wide ocean, haste make no delay,

I fear there's a wreck let us strive for to rescue,
Some part of the crew from the sad deep and cold,
For their shrieks do appal me, their cries they do pierce me
Cries Grace Darling that gallant young female so bold.

Says her father, dear daughter this night the salt waters
Are cold, and the seas they do run mountains high,
'Tis a folly my child this night to attempt the billow,
I fear not the danger, dear father, she cries.

Then the boat was launch'd quickly, the billows were roaring,
To the wreck with her father she ventured we're told,
And nine of the sufferers she did save from drowning,
Grace Horsley Darling that female so bold.

When all dangers were over, her sweet bosom beat lighty,
And tears from her eyes in large torrents did fall,
She cries, we have only saved nine out of sixty,
And I wish dearest father we could have saved all.

Since their lives they did hazard the tempestuous ocean,
That name shall be written in letters of gold,
Here's a health to that maiden, the gallant young damsel,
Grace Horsley Darling that young female so bold.