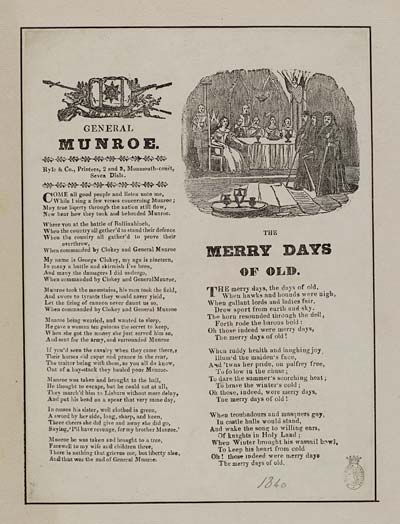 COME all good people and listen unto me,
While I sing a few verses concerning Munroc ;
May true liqerty through the nation still flow,
Now hear how they took and beheaded Munroe.

My name is George Clokey, my age is nineteen,
In many a battle and skirmish I've been,
And many the damagers I did undergo,
When commanded by Clokey and General Munroe.

Munroe took the mountains, his men took the field,
And swore to tyrants they would never yield,
Let the firing of cannon never daunt us so,
When commanded by Clokey and General Munroe

Munroe being wearied, and wanted to sleep,
He gave a woman ten guineas the secret to keep,
When she got the money she just served him so,
And sent, for the army, and surrounded Munroe

If you'd seen the cavalry when they came there,
Their horses did caper and prance in the rear,
The traitor being with them, as you alt do know,
Out of a hay-stack they hauled poor Munroe.

Munroe was taken and brought to the hall,
Be thought to escape, bat he could not at all,
They march'd him to Lisburn without more delay,
And put his head on a spear that very same day,

In comes his sister, well clothed in green,
A sword by her side, long, sharp, and keen,
Three cheers she did give and away she did go,
Saying,'I'll have revenge, for my brother Munroe.'

Munroe he was taken and brought to a tree,
Farewell to my wife and children three,
There is nothing that grieves me, but liberty also,
And that was the end of General Munroe.

THE
MERRY DAYS
OF OLD.

THE merry days, the days of old,
When hawks and hounds were nigh,
When gallant lords and ladies fair,
Drew sport from earth and sky.
The horn resounded through the dell,
Forth rode the barons bold :
Oh those indeed were merry days,
The merry days of old !

When ruddy health and laughing joy,
Illum'd the maiden's face,
And 'twas her pride, on palfrey free,
To ſo low in the chase ;
To dare the summer's scorching heat ;
To brave the winter's cold ;
Oh those, indeed, were merry days,
The merry days of old !

When troubadours and masquers gay,
In castle halls would stand,
And wake the song to willing ears,
Of knights in Holy Land ;
When Winter brought his wassail bowl,
To keep bis heart from cold
Oh! those indeed were merry days
The merry days of old.