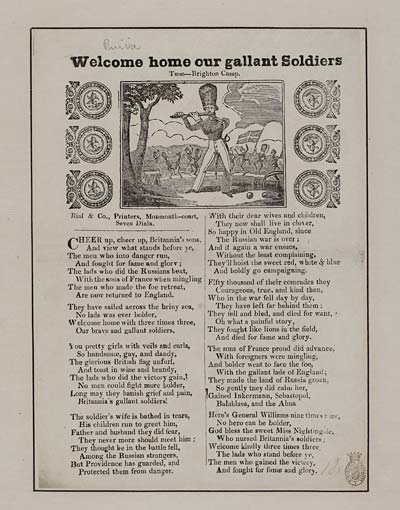 CHEER up, cheer up, Britannia's sons.
And view what stands before ye,
The men who into danger ran,
And fought for fame and glorv ;
The lads who did the Russians beat,
With the sons of France when mingling
The men who made the foe retreat,
Are now returned to England.

They have sailed across the briny sea,
No lads was ever bolder,
Welcome home with three times three,
Our brave and gallant soldiers,

You pretty girls with veils and curls,
So handsome, gay, and dandy,
The glorious British flag unfurl,
And toast in wine and brandy,
The lads who did the victory gain,
No men could fight more bolder,
Long may they banish grief and pain,
Britannia's gallant soldiers!

The soldier's wife is bathed in tears,
His children run to greet him,
Father and husband they did fear,
They never more should meet him ;
They thought he in the battle fell,
Among the Russian strangers,
But Providence has guarded, and
Protected them from danger,

With their dear wives and children,
They now shall live in clover,
So happy in Old England, since
The Russian war is over ;
And if again a war ensues,
Without the least complaining,
They'll hoist the sweet red, white & blue
And boldly go campaigning.

Fifty thousand of their comrades they
Courageous, true, and kind then,
Who in the war fell day by day,
They have loft far behind them ;
They fell and bled, and died for want,
Oh what a painful story,
They fought like lions in the field,
And died for fame and glory.

The sons of France proud did advance,
With foreigners were mingling,
And bolder went to face the foe,
With the gallant lads of England ;
They made the land of Russia groan,
So gently they did calm her,
Gained Inkermann, Sebastopol,
Balaklava, and the Alma

Here's General Williams nine times nine,
No hero can be bolder,
God bless the sweet Miss Nightingale,
Who nursed Britannia's soldiers ;
Welcome kindly three times three
The lads who stand before ye,
The men who gained the victory,
And fought for fame and glory.