Bishop M'Cue; or, the charity sermon 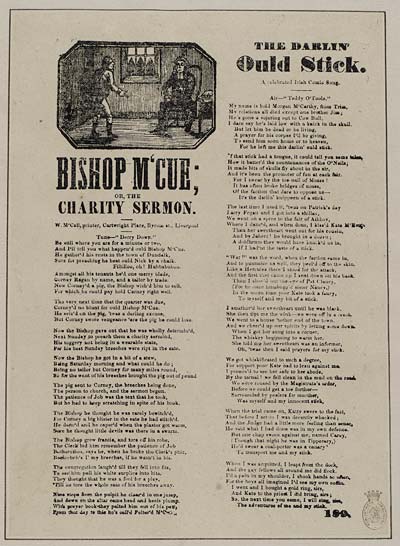 Tune—" Deny Down."
Be still where you are for a minute or two,
And I'll tell you what happen'd ould Bishop M'Cue.
He gather'd his rents in the town of Dundalk,
Sure for preaching he beat ould Nick by a chalk.
Fillilloo, oh! Hubbabubuo.
Amongst all his tenants he'd one merry blade,
Corney Ragan by name, and a tailor by trade.
Now Corney'd a pig, the Bishop wish'd him to sell,
For which he could pay bold Carney right wall.
The very next time that the quarter was due,
Corney'd no blunt for ould Bishop M'Cue.
He seiz'd on the pig, 'twas a darling excuse,
But Corney swore vengeance 'ore the pig he could lose.
Now the Bishop gave out that he was wholly determin'd,
Next Sunday to preaeh them a charity serrnind,
His toggery not being in a wearable state,
For his best Sunday breeches were ript in the sate,.
Now the Bishop he got in a bit of a stew,
Being Saturday morning and what could he do ;
Being no tailor but Corney for many miles round,
So for the want of his breeches brought the pig out of pound
The pig sent to Corney, the breeches being done,
The parson to church, and the sermon begun.
The patience of Job was the text that he took,
But he had to keep scratching in spite of his book.
The Bishop be thought he was rarely bewitch'd,
For Corney a big blister in the sato he had stitch'd.
He danc'd and he caper'd when the plaster got warm,
Sure he thought little devils was there in a swarm.
The Bishop grew frantic, and tore off his robe,
The Clerk' bid him remember the patience of job
Botheration, says he, when he broke tho Clerk's phiz,
\ill\'s I' my breeches, if he wasn't in his
The congregation laugh'd till they fell into fits,
To see him pull his white surplice into bits,
They thought that he was a fool for a play,
"I'll he tore the whole sate of his breeches away.
Nine steps from the pulpit he cleard in one jump,
And down an the altar earns head and heels plump.
With prayer book they palted him out of his pow,
From that day to this he's call'd Felter'd \ill\

Air—" Teddy O'Toole."
My name is bold Morgan M'Carthy, from Trim,
My relations all died except one brother Jim;
He's gone a sojering out to Cow Bull,
I dare say he's laid low with a knick in the skull.
But let him be dead or be living,
A prayer for his corpse I'll be giving,
To send him soon home or to heaven,
For he left me this darlin' ould stick.
If that stick had a tongue, it could tell you some \ill\,
How it batter'd the countenances of the O'Nails;
It made bits of skulls fly about in the air,
And it's been the promoter of fun at each fair.
For I swear by the toe-nail of Moses !
It has often broke bridges of noses,
Of the faction that dare to oppose us—
It's the darlin' knippeen of a stick.
The last time I used it, 'twas on Patrick's day
Larry Fegan and I got into a shillay,
We went on a spree to the fair of Athboy,
Where I dane'd, and when done, I kiss'd Kare \ill\'Eve,
Then her sweetheart went out for his cousin,
And by Jabers ! he brought in a dozen ;
A doldhrum they would have knock'd us in,
If I had'nt the taste of a stick.
"War !" was the word, whoa the faction same in,
And to pummice us well, they peel'd off to the skin.
Like, a Hercules there I stood for the attack,
And the first that came up I sent down on his back.
Then I shov'd out the eye of Pat Clancy,
(For he once bumbugg'd sister Nancy,)
In the mean time poor Kate took a fancy,
To myself and my hit of a stick.
I smather'd her sweetheart until he was black,
She then tipt me the wink—we were off in a \ill\.
We went to a house 'tother end of the town,
And we cheer'd up our spirits fig letting some down.
When I got her snug into a corner,
The whiskey beginning to warm her.
She told me her sweetheart was an informer,
Oh, 'twas then I said prayers for my stick.
We got whiskiftcated to such a degree,
For support poor Kate had to lean against me
I promis'd to see her safe to her abode,
By the tarnal! we fell clean in the mud on the road.
We were roused by the Magistrate's order,
Before we could get a toe further—
Surrounded by peelers for murther,
Was myself and my innocent stick,
When the trial came on, Katty swore to the fact,
That before I set-to I was decently whacked;
And the Judge had a little more feeling than sense,
He said what I had done was in my own defence.
But one chap swore against me, named Carrey,
(Though that night he was in Tipperary,)
He'd swear a coal-porter was a canary!
To transport me and my stick.
When I was acquitted, I leapt from the dock,
And ths gay follows all around me did flock.
I'd a pain in my shoulder, I shook hands so often,
For the boys all imagined I'd see my own coffin,
I went and I bought a gold ring, sirs,
And Kate to the priest I did bring, sirs ;
So, the next time you come, I will sing, sirs,
The adventures of me and my stick.