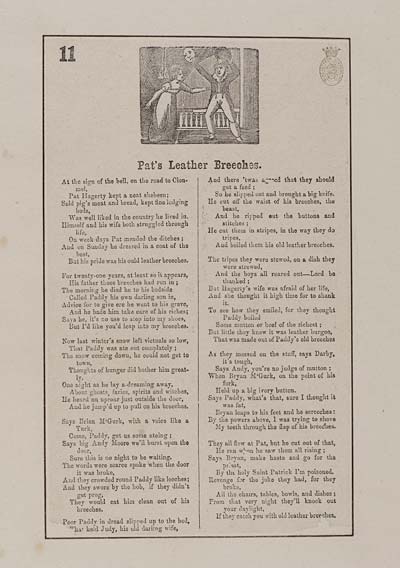 At the sign of the bell, on the road to Clon-
mel,
Pat Hagerty kept a neat shebeen;
Sold pig's meat and bread, kept fine lodging
beds,
Was well liked in the country be lived in.
Himself and bis wife both struggled through
life,
On weekdays Pat mended the ditches ;
And on Sunday he dressed in a coat of the
best,
But his pride was his ould leather breeches.

For twenty-one years, at least so it appears,
His father those breeches had run in ;
The morning he died he tor his bedside
Called Paddy his own darling son in,
Advice for to give ere he went to his grave,
And he bade him take care of his riches;
Says he, it's no use to step into my shoes,
But I'd like you'd leap into my breeches.

Now last winter's snow left victuals so low,
That Paddy was ate out complately ;
The show coming down, be could not get to
town,
Thoughts of hunger did bother him great-
One night as he lay a-dreaming away,
About ghosts faries, spirits and witches,
He heard an uproar just outside the door,
And he jump'd up to pull on his breeches.

Says Brian M'Gurk, with a voice like a
Turk,
Come, Paddy, get us some ateing ;
Says big Andy Moore we'll burst open the
door,
Sure this is no night to be waiting.
The words were scarce spoke when the door
it was broke,
And they crowded round Paddy like leeches;
And they swore by the hob, if they didn't
get prog,
They would eat him clean out of his
breeches.

Poor Paddy in dread slipped up to the bed,
That held Judy, his old darling wife,
And there 'twas agreed that they should
get a feed ;
So he slipped out and brought a big knife.
He cut off the waist of his breeches, the
beast,
And he ripped out the buttons and
stitches ;
He cut them in stripes, in the way they do
tripes,
And boiled them his old leather breeches.

The tripes they were stewed, on a dish they
were strewed,
And the boys all roared out—Lord be
thanked;
But Hagerty's wife was afraid of her life,
And she thought it high time for to shank
it.
To see how they smiled, for they thought
Paddy boiled
Some mutton or beef of the richest ;
But little they knew it was leather burgoo,
That was made out of Paddy's old breeches

As they messed on the stuff, says Darby,
it's tough,
Says Andy, you're no judge of mutton ; '
When Bryan M'Gurk, on the point of his
fork,
Held up a big ivory button.
Says Paddy, what's that, sure I thought it
was fat,
Bryan leaps to his feet and he screeches;
By the powers above, I was trying to shove
My teeth through the flap of his breeches.

They all flew at Pat, but he cut out of that,
He ran when he saw them all rising ;
Says Bryan, make haste and go for the
priest,
By the holy Saint Patrick I'm poisoned.
Revenge for the joke they had, for they
broke,
All the chairs, tables, bowls, and dishes;
From that very night they'll knock out
your daylight,
If they catch you with old leather breeches.