Grand conversation under the rose 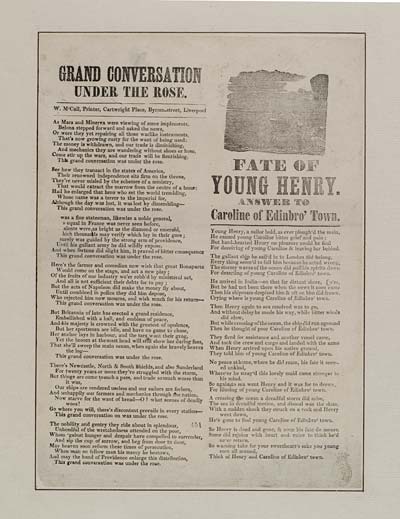 As Mars and Minerva were viewing of some implements,
Belona stepped forward and asked the news,
Or were they yet repairing all those warlike instruments,
That's now growing rusty for the want of being used:
The money is withdrawn, and our trade is diminishing,
And mechanics they are wandering without shoes or hose,
Come stir up the wars, and our trade will be flourishing,
This grand conversation was under the rose.

See how they transact in the states of America,
Their renowned independence sits firm on the throne,
They're never misled by the schemes of a ministry,
That would extract the marrow from the centre of a bone :
Had he enlarged that hero who set the world trembling,
Whose name was a terror to the imperial foe,
Although the day was lost, it was lost by dissembling—
This grand conversation was under the rose.

was a fine statesman, likewise a noble general,
s equal in France was never seen before,
alents were as bright as the diamond or emerald,
hich thousands may verify which lay in their gore;
surely was guided by the strong arm of providence,
Until his gallant army he did wildly expose,
And when fortune did slight him, it proved of bitter consequence
This grand conversation was under the rose.

Here's the farmer and comedian now wish that great Bonaparte
Would come on the stage, and act a new play ;
Of the fruits of our industry we'er robb'd by ministeral act,
And all is not sufficient their debts for to pay ;
But the acts of Napoleon did make the money fly about,
Until combined in police they did him depose,
Who rejected him now mourns, and wish much for his return—
This grand conversation was under the rose.

But Britannia of late has erected a grand residence,
Embellished with a hall, and emblem of peace,
And his majesty is crowned with the greatest of opulence,
But her sportsmen are idle, and have no game to chase,
Her anchor lays in harbour, and the tars want their grog,
Yet the broom at the mast head will still show her daring foes,
That she'll sweep the main ocean, when again she bravely heaves
the log—
This grand conversation was under the rose.

There's Newcastle, North & South Shields, and also Sunderland
For twenty years or more they've struggled with the storm,
But things are come to such a pass, and trade so much worse than
it was,
Our ships are rendered useless and our sailors are forlorn,
And unhappily our farmers and mechanics through the nation,
Now starve for the want of bread—O ! what scenes of deadly
woes!
Go where you will, there's discontent prevails in every station—
This grand conversation on was under the rose.

The nobility and gentry they ride about in splendour,
Unheedfid of the wretchedness attended on the poor,
Whom 'gainst hunger and despair have compelled to surrender,
And sip the cup of sorrow, and beg from door to door,
May heaven soon reform these times of persecution,
When man on fellow man his mercy he bestows,
And may the hand of Providence enlarge this distribution,
This grand conversation was under the rose.

Young Henry, a sailor bold, as ever plough'd the main,
He caused young Caroline' bitter grief and pain;
But hard-hearted Henry no pleasure could he find
For deceiving of young Caroline & leaving her behind.

The gallant ship he sail'd in to London did belong,
Every thing seem'd to fail him because he acted wrong,
The stormy waves of the ocean did pull his spirits down
For deserting of young Caroline of Edinbro' town.

He arrived in India—on that far distant shore, [o'er,
But he had not been there when the news it soon came
Then his shipmate despised him & oft on him did frown,
Crying where is young Caroline of Edinbro' town.

Then Henry again to sea resolved was to go,
And without delay he made his way, while bitter winds .
did blow,
But while crossing of the ocean, the ship did run aground
Then he thought of poor Caroline of Edinbro' town.

They fired for assistance and another vessel came,
And took the crew and cargo and landed with the same
When Henry arrived upon his native ground,
They told him of young Caroline of Edinbro' town.

No peace at home, where he did roam, his fate it seem-
ed unkind,
Where'er he stray'd this lovely maid came stronger to .
his mind.
So again|to sea went Henry and it was for to drown,
For illusing of young Caroline of Edinbro' town.

A crossing the ocean a dreadful storm did arise,
The sea in dreadful motion, and dismal was the skies,
With a sudden shock they struck on a rock and Henry
went down,
He's gone to find young Caroline of Edinbro' town.

So Henry is dead and gone, & none his fate do mourn
Some did rejoice with heart and voice to think he'd
ne'er return.
So warning take for your sweetheart's sake you young
men all around,
Think of Henry and Caroline of Edinbro' town.