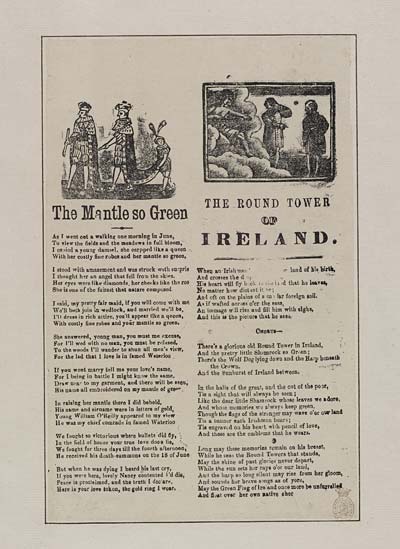 The Mantle so Green

As I went out a walking one morning in June,
To view the fields and the meadows in full bloom,
I espied a young damsel, she earpped lite a queen
With her costly fine robes and her mantle so green,

I stood with amazement and was struck wsth surpris
I thought her an angel that fell from the skies.
Her eyes were like diamonds, her cheeks like the ros
She is one of the fairest that nature composed.

I said, my pretty fair maid, if yon will come with me
We'll bath join in wedlock, and married we'll be,
I'll dress in rich attire, you'll appear tike a queen,
With costly fine robes and your mantle so green,

She answered, young man, yon must me excuse,
For I'll wed with no man, yon must be refused,
To the woods I'll wander to shun all men's view,
For the lad that I love is in famed Waterloo .

If yon wont marry tell me your love's name,
For I being in battle I might know the same.
Draw near to my garment, and there will be seen,
His name all embroidered on my mantle of green

In raising her mantle there I did behold,
. His name and sirname were in letters of gold,
Young William O'Reilly appeared to my view
He was my chief comrade in famed Waterloo

We fought so victorious where bullets did fly,
In the field of honor your true love does lie,
We fought for three days till the fourth afternoon,
He received his death-summons on the 18 of June

But when he was dying I heard his last cry,
If you were here, lovely Nancy contented I'd die,
Peace is proclaimed, and the truth I dec are,
Here is your love tokon, the gold ring I wear,

When an Irishman land of his birth,
And crosses the
His heart will fly back to the land that he leaves,
No matter how distant it be ;
And oft on the plains of some far foreign soil.
As if wasted across o'er the seas,
An immage will rise and fill him with sighs,
And this is the picture that he sees.

There's a glorious old Round Tower In Ireland,
And the pretty little Shamrock so Green;
There's the Wolf Dog lying down and the Harp beneath
the Crown,
And the Sunburst of Ireland between,

In the halls of the great, and the cot of the poor,
Tis a sight that will always be seen ;
Like the dear little Shamrock whose leaves we adore,
And whose memories we always keep green,
Though the flags of the stranger may wave o'er our land
Tis a banner each Irishman bears;
Tis engraved on his heart with pencil of love,
And these are the emblems that he wears.

Long may these memories remain on his breast,
While he sees the Round Towers that stands,
May the shine of past glories never depart,
While the sun sets her rays o'er our land,
And the harp so long silent may rise from her gloom,
And sounds her brave songs as of yore,
May the Green Flag of Ireland once more be unfurrelled
And float over her own native shor