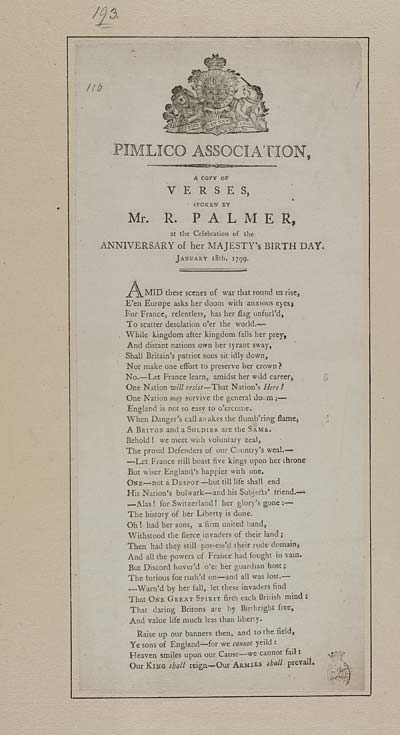 at the Celebration of the

ANNIVERSARY of her MAJESTY'S BIRTH DAY.

AMID these scenes of war that round us rise,
E'en Europe asks her doom with anxious eyes;
For France, relentless, has her flag unfurl'd,
To scatter desolation o'er the world.—
While kingdom after kingdom falls her prey,
And distant nations own her tyrant sway,
Shall Britain's patriot sons sit idly down,
Nor make one effort to preserve her crown ?
No.—Let France learn, amidst her wild career,
One Nation will resist—That Nation's Here !
One Nation may survive the general doom;—
England is not so easy to o'ercome.
When Danger's call awakes the slumb'ring flame,
A BRITON and a SOLDIER are the SAME.
Behold ! we meet with voluntary zeal,
The proud Defenders of our Country's weal.—
—Let France still boast five kings upon her throne
But wiser England's happier with one.
ONE—not a DESPOT—but till life shall end
His Nation's bulwark—and his Subjects' friend.—
—Alas! for Switzerland! her glory's gone :—
The history of her Liberty is done.
Oh! had her sons, a firm united band,
Withstood the fierce invaders of their land ;
Then had they still possess'd their rude domain,
And all the powers of France had fought in vain.
But Discord hover'd o'er her guardian host ;
The furious foe rush'd on—and all was lost.—
—Warn'd by her fall, let these invaders find
That ONE GREAT SPIRIT fires each British mind :
That daring Britons are by Birthright free,
And value life much less than liberty.

Raise up our banners then, and to the field,
Ye sons of England—for we cannot yeild :
Heaven smiles upon our Cause—we cannot fail :
Our KING shall reign—Our ARMIES shall prevail.