Pulling down the chapels in America by the infidel New Lights 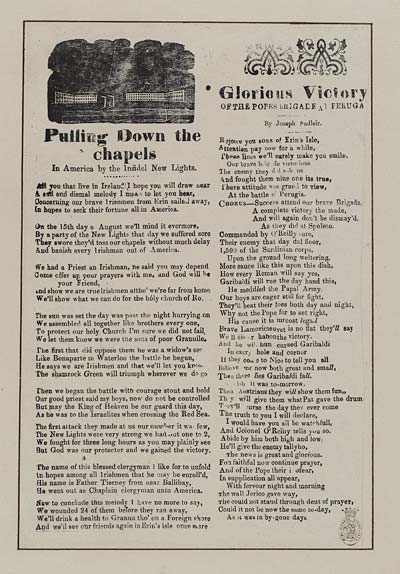 Pulling Down the
chapels

In America by the Inndel New Lights.

All you that live in Ireland I hope you will draw near
A sad and dismal melody I mean to let you hear,
Concerning our brave Irishmen from Erin sailed away,
In hopes to seek their fortune all in America.

On the 15th day o August we'll mind it evermore,
By a party of the New Lights that day we suffered sore
They swore they'd toss our chapels without much delay
And banish every Irishman out of America.

We had a Priest an Irishman, he said you may depend
Come offer up your prayers with me, and God will be
your Friend,
And show we are true Irishmen altho' we're far from home
We'll show what we can do for the holy church of Ro.

The sun was set the day was past the night hurrying on
We assembled all together like brothers every one,
To protect our holy Church I'm sure we did not fail
We let them know we were the sons of poor Granuile,

The first that did oppose them he was a widow's son
Like Bonaparte in Waterloo the battle he begun,
He says we are Irishmen and that we'll let you known
The shamrock Green will triumph wherever we do go

Then we began the battle with courage stout and bold
Our good priest said my boys, now do not be controlled
But may the King of Heàven be our guard this day,
As he was to the Israelites when crossing the Red Sea.

The first attack they made at us our number it was few,
The New Lights were very strong we had but one to 2,
We fought for three long hours as you may plainly see
But God was our protector and we gained the victory.

The name of this blessed clergyman I like for to unfold
in hopes among all Irishmen that he may be enroll'd,
His name is Father Tierney from near Ballibay,
He went out as Chaplain clergyman unto America.

Now to conclude this melody I have no more to say,
We wounded 24 of them before they ran away,
We'll drink a health to Granua tho' on a Foreign shore
And we'll see our friends again in Erin's isle once more

OF THS POPES BRIGADE AT PEHUGA

Rejoice you sons of Erin's Isle,
Attention pay now for a while,
These lines we'll surely make you smile,
Our brave brigade victorious
The enemy they did sub ue
And fought them nine one its true,
There attitude was grand to view,
At the battle of Perugia.
CHORUS-Success attend our brave Brigade,
A complete victory the made,
And will again don't be dismay'd,
As they did at Spoleto.
Commanded by O'Reilly sure,
Their enemy that day did floor,
1,500 of the Sardinian corps,
Upon the ground long weltering.
More sauce like this upon this dish,
How every Roman will say yes,
Garibaldi will rue the day hand this,
He meddled the Papal Army.
Our boys are eager still for fight,
They'll beat their foes both day and night,
Why not the Pope for to set right,
His cause it is mreost lega.l
Brave Lamoricieuyot is no flat they'll say
We ll die or hahonthe victory.
And he will huny cursed Garibaldi
In excry hole and cornor
If they come to Nice to tell you all
Believe me now both great and small,
Then there lies Garibaldi fall.
Irish it was to-morrow.
Then Austrians they will show them fun,
They will give them what Pat gave the drum
They'll curse the day they ever come
The truth to you I will declare,
I would have you all be watchfull,
And Colonel O'Reilly tells you so.
Abide by him both high and low
He'll give the enemy tallyho,
The news is great and glorious.
Fou faithful now continue prayer,
And of the Pope their i ofear,
In supplication all appear,
With fervour night and morning
The wall Jerico gave way,
The could not stand through dent of prayer,
Could it not be now the same to-day,
As it was in by-gone days