Lines by a reformed drunkard 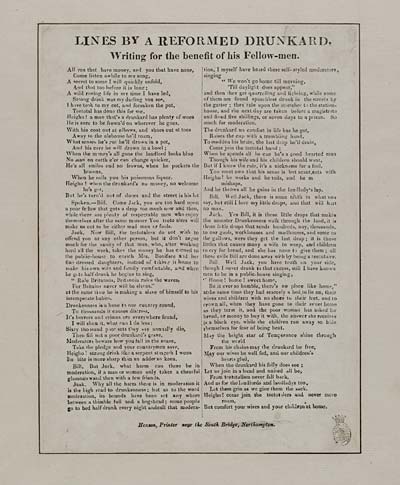 LINES BY A REFORMED DRUNKARD,

Writing for the benefit of his Fellow-men.

AH you that have money, and you that have none,
Come listen awhile to my song,
A secret to some I will quickly unfold,
And that too before it is long;
A wild roving life in my time I have led,
Strong drink was my darling you see,
I have took to my cot, and forsaken the pot,
Teetotal has done this for me,
Heigho! a man that's a drunkard has plenty of woes
He is sure to be frown'd on wherever he goes.

With his coat out at elbows, and shoes out at toes
Away to the alehouse he'll roam,
What senses he's got he'll drown in a pot,
And his care he will drown in a bowl ;
When the money's all gone the landlord looks blue
No man on earth e'er can change quicker,
He's all smiles and no frowns, when he pockets the
browns,
When he sells you his poisonons liquor.
Heigho ! when the drunkard's no money, no welcome
he's got,
But he's turn'd out of doors and the street is his lot

Spoken.—Bill. Come Jack, you are too hard upon
a poor fellow that gets a drop too much now and then,
while there are plenty of respectable men who enjoy
themselves after the same manner You teeto alers will
make us out to be either mad men or fools.

Jack. Now Bill, the teetotalers do not wish to
offend you or any other person, but it don't argue
much for the sanity of that man, who, after working
hard all the week, takes the money he has earned to
the public-house to enrich Mrs. Boniface and her
fine dressed daughters, instead of taking it home to
make his own wife and family comfortable, and when
he gets half drunk he begins to sing,

" Rule Britannia, Britannia rules the waves,
For Britains never will be slaves."
at the same time he is making a slave of himself to his
intemperate habits.

Drunkenness is a bane to our country round,
To thousands it causes distress.
It's horrors and crimes are everywhere found,
I will shun it, what can I do less :
Sixty thousand poor sots they say annually die,
Then fill not a poor drunkard's grave,
Moderators beware how you fall in the snare,
Take the pledge and your countrymen save,
Heigho ! strong drink like a serpent stingeth I ween
Its bite is more sharp than an adder so keen.

Bill. But Jack, what harm can there be in
moderation, if a man or woman only takes a cheerful
glassnco wand then with a few friends.

Jaak. Why all the harm there is in moderation it
is the high road to drunkenness; but as to the ward
moderation, its bounds have been set any where
between a thimble full and a hogshead ; some people
go to bed half drunk every night andcall that modera-
tion, I myself have heard these self-styled moderators,
singing

" We won't go home till morning,
'Till daylight does appear,"
and then they get quarrelling and fighting, while some
of them are found speechless drunk in the streets by
the gutter ; they ride upon the stretcher to the station-
house, and the next day are taken before a magistrate
and fined five shillings, or seven days to a prison. So
much for moderation.

The drunkard no comfort in life has he got,
Raises the cup with a trembling hand,
To madden his brain, the last drop he'll drain,
Come join the teetotal band ;
When he spends all he can he's a good hearted man
Though his wife and his children should want,
But if I know the rule, it's a nickname for a fool,
Ton must own that his sense is but scant,eets with
Heigho! he works and he toils, and he m
mishaps,
And he throws all he gains in the landlady's lap.

Bill. Well Jack, there is some truth in what you
say, but still I love my little drops, and that will hart
no man.

Jack. Yes Bill, it is those little drops that makes
the monster Drunkenness walk through the land, it is
those little drops that sends hundreds, nay, thousands,
to our gaols, workhouses and madhouses, and some to>
the gallows, were they get the last drop ; it is those
littles that causes many a wife to weep, and children
to cry for bread, and she has none to give them ; all
these evils Bill are done away with by being a teetotaler.

Bill. Well Jack, you have truth on your side,
though I never drank to that excess, still I have known
men to be in a public-house singing,

" Home I home ! sweet home,
Be it ever so humble, there's no place like home,"
atthe same time they had scarcely a bed to lie on, their
wives and children with no shoes to their feet, and to
crown all, when they have gone to their sweet home
as they term it, and the poor woman has asked for
bread, or money to buy it with, the answer she receives -
is a black eye. while the children run away so hide
themselves for fear of being beat.

May the bright star of Temperance shine through
the world
From his chains may the drunkard be free,
May our wives be well fed, and our children's
hearts glad,
When the drunkard his folly does see ;
Let us join in a band and united all be,
From toetotalism never fell back,
And as for the landlords and landlady's too,
Let them grin as we give them the sack.
Heighof ! come join the teetotalers and never more
roam,
But comfort your wives and your children, at home.