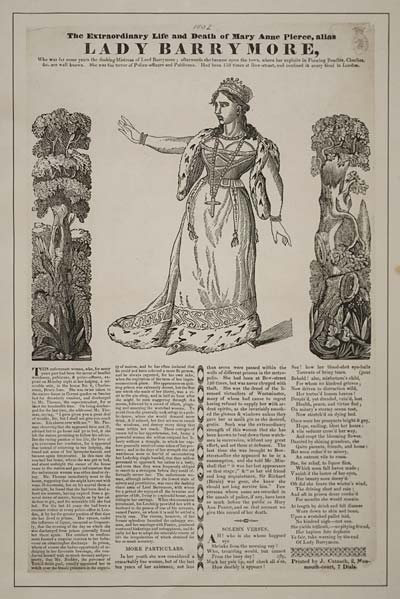 The Extraordinary Life and Death of Mary Anne Pierce, alias

Who was for some years the dashing Mistress of Lord Barrymore ; afterwards the became upon the town, where her exploits in Flooring Beadles, Charlies,
&c. are well known. She was the terror of Police-officers and Publicans. Had been 150 times at Bow-street, and confined in every Goal in London.

THIS unfortunate woman, who, for many
years past had been the terror of beadles
watchmen, publicans, & police-officers, ex-
pired on Monday night at her lodging, a mi-
serable attic, in the house No. 8,-Charles-
street, Drury-lane. She was twice taken to
the station-house in Covent-garden on Sunday
last for disorderly conduct, and discharged
by Mr. Thomas, the superintendent, for at
least the hundredth time. On being dischar-
ged for the last time, she addressed Mr. Tho-
mas, saying, " I gave given you a great deal
of trouble, Sir, but I shall not give you much
more. It is almost over with me." Mr. Tho-
mas observing that she appeared faint and ill,
advised her to go home and go to bed, & she
left the station promising to follow his advice.
But the ruling passion of her life, the love of
gin overcame her resolution, for it appeared
that instead of returning to her lodging, she
found out some of her favourite haunts, and
became again intoxicated. In this state she
reached her home, where she. was put to bed,
and about midnight the owner of the house
came to the station and gave information that
the unfortunate woman was either dead or dy-
ing. Mr. Thomas immediately went to the
house, supposing that she might have met with
some ill-treatment, but on his arrival there at
midnight, he found that she had been dead a-
bout ten minutes, having expired from a ge-
neral decay of nature, brought on by her ad-
diction to gin, and the miserable life she had
led. For the last 15 years she had been a
constant visitor at every police-office in Lon-
don, & by far the greater portion of that time
she has lived in prison. Her excess, under
the influence of liquor, occurred so frequent-
ly, that the evening of the day on which she
was discharged from prison generally found
her there again. Her conduct in confine-
ment formed a singular contrast to her beha-
viour on obtaining her discharge In prison,
where of course she had no opportunity of in-
dulging in her favourite beverage, she con-
ducted herself with so much decency and pro-
priety, that Mr. Nodder, the governor of
Tothill-fields gaol, usually appointed her to
watch over the female prisoners in the capaci-
ty of matron, and he has ofton declared that
he could not have selected a more fit person,
and he always regretted, for her own sake,
when the expiration of the term of her impri-
sonment took place. Her appearance on quit-
ting prison was extremely decent, but the first
use which she made of her liberty, was a vi-
sit to the gin-shop, and in half an hour after
she might be seen staggering through the
streets, followed by a crowd of idlers, plagu-
ing and annoying the wretched woman. To
avoid them she generally took refuge in a pub-
lic-house, where she would demand more
drink, & if refused, her first act was to smash
the windows, and destroy every thing that
came within her reach. These outrages of
course led to her apprehension, but, being a
powerful woman she seldom resigned her li-
berty without a struggle, in which her cap-
tors generally received some token of her pro-
wess ; and in the days of her strength the old
watchman were so fearful of encountering
her Ladyship single handed, that they seldom
presumed to approach her unless in a body,
and even then they were frequently obliged
to resort to a stratagem before they could ef-
fectually secure her. The unfortunate wo-
man, although reduced to the lowest state of
misery and prostitution, was once the dashing
chere amie of Lord Barrymore, with whom
for a period she enjoyed ail the luxuries and
gaieties of life, living in a splendid house, and
riding in her carriage. When this connexion
terminaied, his Lordship provided her with a
husband in the person of one of his servants,
named Pearce, on whom it is said he settled a
yearly sum. The visions, however, of her
former splendour haunted the unhappy wo-
man, and her marriage with Pearce, produced
continual bickerings and unhappiness, and fi-
nally led her to adopt the miserable course of
life the irregularities of which obtained for
her so much notoriety.

In her youth she was considered a
remarkably fine woman, but of the last
ten years of her existence, not less
than seven were passed within the
wslls of different prisons in the metro-
polis. She had been at Bow-street
150 times, but was never charged with
theft. She was the dread of the li-
censed victuallers of Westminster,
many of whom had cause to regret
having refused to supply her with ar-
dent spirits, as she invariably smash-
ed the glasses & windows unless they
gave her as much gin as the desired,
gratis. Such was the extraordinary
strength of this woman that she has
been known to beat down three watch-
men in succession, without any great
effort, and set them at defiance. The
last time she was brought to Bow-
street-office she appeared to be in a
consumption, and she told Mr .Min-
shull that "it was her last appearance
on that stage;" & "as her old friend
and long acquaintance. Sir Richard
(Birnie) was gone, she knew she
should not long survive him." Few
persons whose name are recorded in
the annals of police, if any, have been
so much before the public its Mary
Ann Pearce, and on that account we
give this record of her death.

AH! who is she whose haggard
eye
Shrinks from the morning ray?
Who, trembling would, but cannot
From the busy day !                (fly,
Mark her pale lip, and cheek all o'er,
How deathly it appears !
See ! how her bloo-shot eye-balls
Torrents of briny tears.           (pour
Behold ! alas, misfortune's child.
For whom no kindred grieves ;
Now driven to distraction wild.
Her tortur'd bosom heaves!
Despis'd, yet dreaded, ruin'd, lost
Health, peace, and virtue fled ;
On misery's stormy ocean tost,
Now stretch'd on dying bed.
Once were her prospects bright & gay ,
Hope, smiling, blest her hours ;
A vile seducer cross'd her way,
And cropt the blooming Bower.
Dazzled by shining grandeur, she
Qnits parents, friends, and home :
But soon reduc'd to misery,
An outcast vile to roam.
She, for relief, to liquor flies,
oft did she brave the winter's wisd.
The driving sleet and rain ;
And oft in prison drear confin'd
For months she would remain.
At length by drink and fell disease
Worn down to skin and bone,
Upon a wretched pallet laid,
No kindred night - not one.
Her hapless fate deplores
Ye fair, take warning by the end
of Lady Barrymore.