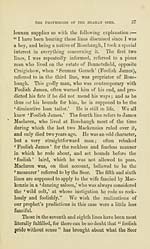 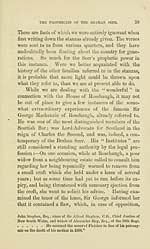 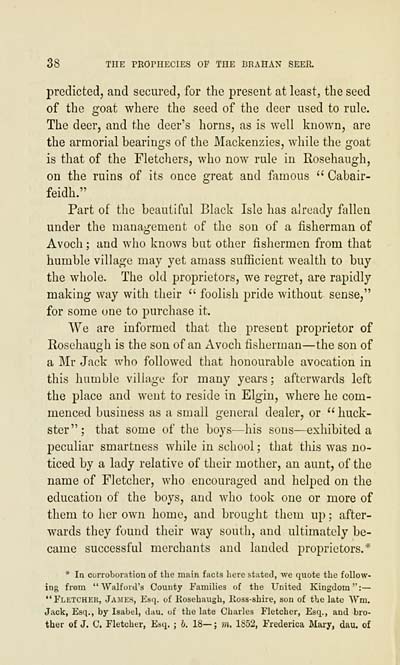 38 THE PROPHECIES OP THE BRASAN SEER.
predicted, and secured, for the present at least, the seed
of the goat where the seed of the deer used to rule.
The deer, and the deer's horns, as is well known, are
the armorial bearings of the Mackenzies, while the goat
is that of the Fletchers, who now rule in Rosehaugh,
on the ruins of its once great and famous " Cabair-
feidh."
Part of the beautiful Black Isle has already fallen
under the management of the son of a fisherman of
Avoch ; and who knows bat other fishermen from that
humble village may yet amass sufficient wealth to buy
the whole. The old proprietors, we regret, are rapidly
making way with their " foolish pride without sense,"
for some one to purchase it.
We are informed that the present proprietor of
Rosehaugh is the son of an Avoch fisherman — the son of
a Mr Jack who followed that honourable avocation in
this humble village for many years; afterwards left
the place and went to reside in Elgin, where he com-
menced business as a small general dealer, or " huck-
ster"; that some of the boys — his sons — exhibited a
peculiar smartness while in school ; that this was no-
ticed by a lady relative of their mother, an aunt, of the
name of Fletcher, who encouraged and helped on the
education of the boys, and who took one or more of
them to her own home, and brought them up ; after-
wards they found their way south, and ultimately be-
came successful merchants and landed proprietors.*
* In corroboration of the main facts here stated, we quote the follow-
ing from "Walfortl's County Families of the United Kingdom":—
"Fletcher, James, Esq. of Kosehaugh, lloss-shire, son of the late Wm.
Jack, Esq., by Isabel, dau. of the late Charles Fletcher, Esq., and bro-
ther of J. C. Fletcher, Esq. ; b. 18—; m. 1852, Frederica Mary, dau. of