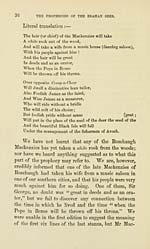 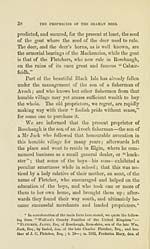 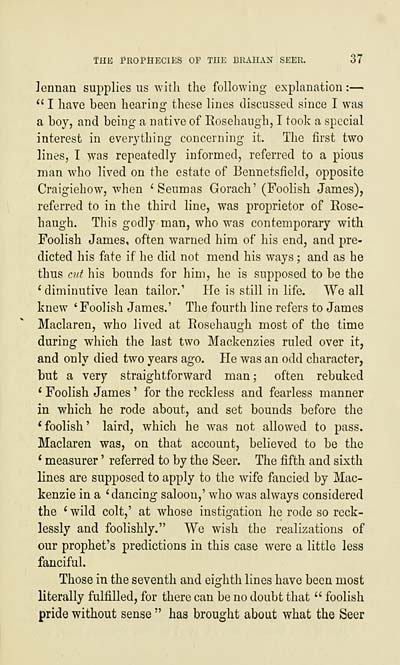 The Prophecies oe the brahan seer. 37
lennan supplies us with the following explanation : —
*' I have been hearing these lines tliscussed since I was
a boy, and being a native of Rosehaugh, I took a special
interest in everything concerning it. The first two
lines, I was repeatedly informed, referred to a pious
man who lived on the estate of Bennetsfield, opposite
Craigiehow, when ' Seumas Gorach' (Foolish James),
referred to in the third line, was proprietor of Rose-
haugh. This godly man, who was contemporary with
Foolish James, often warned him of his end, and pre-
dicted his fate if he did not mend his ways ; and as he
thus ad his bounds for him, he is supposed to be the
' diminutive lean tailor.' He is still in life. AVe all
knew ' Foolish James.' The fourth line refers to James
Maclaren, who lived at Rosehaugh most of the time
during which the last two Mackenzies ruled over it,
and only died two years ago. He was an odd character,
but a very straightforward man; often rebuked
* Foolish James ' for the reckless and fearless manner
in which he rode about, and set bounds before the
* foolish' laird, which he was not allowed to pass.
Maclaren was, on that account, believed to be the
' measurer ' referred to by the Seer. The fifth and sixth
lines are supposed to apply to the wife fancied by Mac-
kenzie in a 'dancing saloon,' who was always considered
the ' wild colt,' at whose instigation he rode so reck-
lessly and foolishly." We wish the realizations of
our prophet's predictions in this case were a little less
fanciful.
Those in the seventh and eighth lines have been most
literally fulfilled, for there can be no doubt that " foolish
pride without sense *' has brought about what the Seer