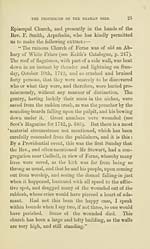 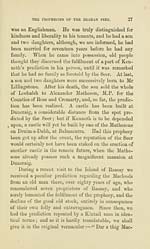 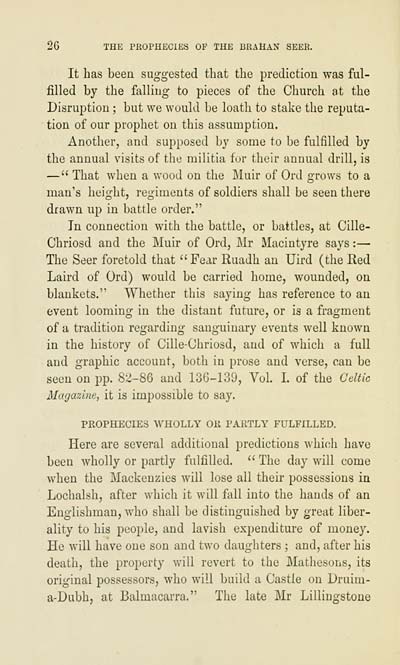 26 THE PROPHECIES OF THE BRA HAN SEER.
It has been suggested that the prediction was ful-
filled by the falling to pieces of the Church at the
Disruption ; but we would be loath to stake the reputa-
tion of our prophet on this assumption.
Another, and supposed by some to be fulfilled by
the annual visits of the militia for their annual drill, is
— " That when a wood on the Muir of Ord grows to a
man's height, regiments of soldiers shall be seen there
drawn up in battle order."
In connection with the battle, or battles, at Cille-
Chriosd and the Muir of Ord, Mr Macintyre says : — •
The Seer foretold that "Fear Ruadh an Uird (the Red
Laird of Ord) would be carried home, wounded, on
blankets." Whether this saying has reference to an
event looming in the distant future, or is a fragment
of a tradition regarding sanguinary events well known
in the history of Cille-Chriosd, and of which a full
and graphic account, both in prose and verse, can be
seen on pp. 82-86 and 136-139, Vol. I. of the Celtic
Magazine, it is impossible to say.
PROPHECIES WHOLLY OK PAETLY FULFILLED.
Here are several additional predictions which have
been wholly or partly fulfilled. " The day will come
when the Mackenzies will lose all their possessions in
Lochalsh, after which it will fall into the hands of an
Englishman, who shall be distinguished by great liber-
ality to his people, and lavish expenditure of money.
He will have one son and two daughters ; and, after his
death, the property will revert to the Mathesons, its
original possessors, who will build a Castle on Druim-
a-Dubh, at Balmacarra." The late Mr Lillingstone