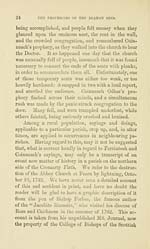 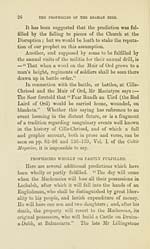 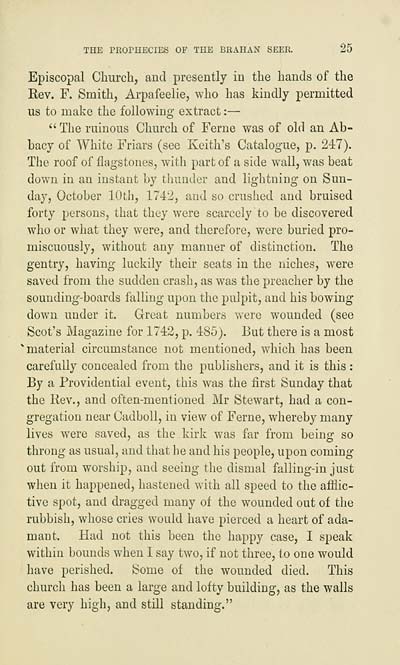 THE PROPHECIES OF THE BRAHAN SEER. 25
Episcopal Church, and presently in the hands of the
Rev. F. Smith, Arpafeelie, who has kindly permitted
us to make the following extract : —
"The ruinous Church of Feme was of old an Ab-
bacy of White Friars (see Keith's Catalogue, p. 247).
The roof of flagstones, with part of a side wall, was beat
down in an instant by thunder and lightning on Sun-
day, October 10th, 1742, and so crushed and bruised
forty persons, that they were scarcely to be discovered
who or what they were, and therefore, were buried pro-
miscuously, without any manner of distinction. The
gentry, having luckily their seats in the niches, were
saved from the sudden crash, as was the preacher by the
sounding-boards falling upon the pulpit, and his bowing
down under it. Great numbers were wounded (see
Scot's Magazine for 1742, p. 485). But there is a most
material circumstance not mentioned, which has been
carefully concealed from the publishers, and it is this :
By a Providential event, this was the first Sunday that
the Rev., and often-mentioned Mr Stewart, had a con-
gregation near Cadboll, in view of Feme, whereby many
lives were saved, as the kirk was far from being so
throng as usual, and that he and his people, upon coming
out from worship, and seeing the dismal falling-in just
when it happened, hastened with all speed to the afflic-
tive spot, and dragged many of the wounded out of the
rubbish, whose cries would have pierced a heart of ada-
mant. Had not this been the happy case, I speak
within bounds when I say two, if not three, to one would
have perished. Some of the wounded died. This
church has been a large and lofty building, as the walls
are very high, and still standing."