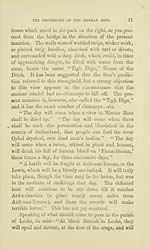 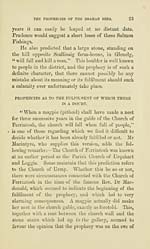 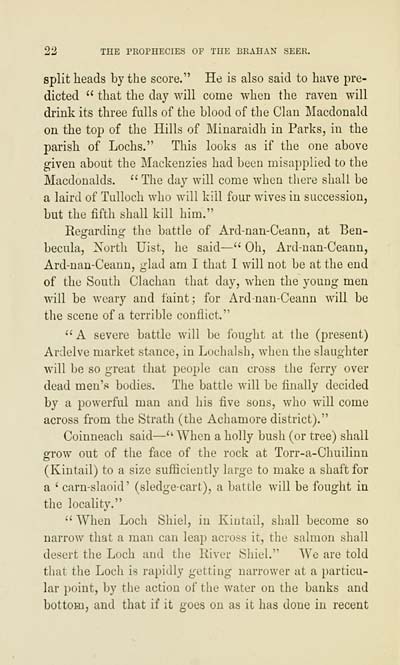 22 THE TROPHECIES OF THE BRAHAN SEER.
split heads by the score." He is also said to have pre-
dicted " that the day will come when the raven will
drink its three fulls of the blood of the Clan Macdonald
on the top of the Hills of Minaraidh in Parks, in the
parish of Lochs." This looks as if the one above
given about the Mackenzies had been misapplied to the
Macdonalds. " The day will come when there shall be
a laird of Tulloch who will kill four wives in succession,
but the fifth shall kill him."
Regarding the battle of Ard-nan-Ceann, at Ben-
becula, Xorth Uist, he said — " Oh, Ard-uan-Ceann,
Ard-nan-Ceauu, glad am I that I will not be at the end
of the South Clachan that day, when the young men
will be weary and faint ; for Ard-nan-Ceann will be
the scene of a terrible conflict."
" A severe battle will be fought at the (present)
Ardelve market stance, in Lochalsh, when the slaughter
will be so great that people can cross the ferry over
dead men's bodies. The battle will be finally decided
by a powerful man and his five sons, who will come
across from the Strath (the Achamore district)."
Coinneach said — '' When a holly bush (or tree) shall
grow out of the face of the rock at Torr-a-Chuilinn
(Kintail) to a size sufficiently large to make a shaft for
a ' carn-slaoid' (sledge-cart), a battle will be fought in
the locality."
" When Loch Shiel, in Kintail, shall become so
narrow that a man can leap across it, the salmon shall
desert the Loch and the River Shiel." We are told
that the Loch is rapidly getting narrower at a particu-
lar point, by the action of the water on the banks and
bottom, and that if it goes on as it has done in recent