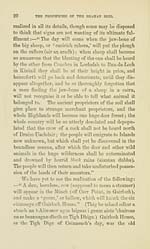 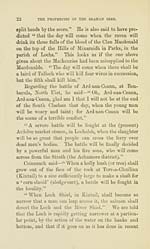 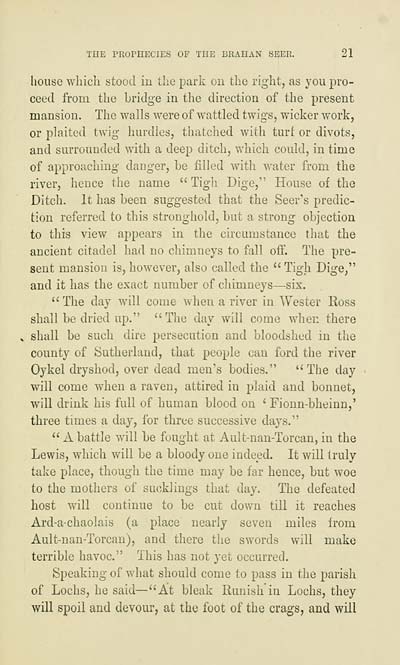 THE PROPHECIES OP THE BRAHAN SEER. 21
liouse which stood iu the park on the right, as you pro-
ceed from the bridge in the direction of the present
mansion. The walls were of wattled twigs, wicker work,
or plaited twig hurdles, thatched with turf or divots,
and surrounded with a deep ditch, which could, in time
of approaching danger, he filled with water from the
river, hence the name " Tigh Dige," House of the
Ditch. It has been suggested that the Seer's predic-
tion referred to this stronghold, but a strong objection
to this view appears in the circumstance that the
ancient citadel had no chimneys to fall off. The pre-
sent mansion is, however, also called the " Tigh Dige,"
and it has the exact number of chimneys — six.
" The day will come when a river in Wester Ross
shall be dried up." " The day will come when there
shall be such dire persecution and bloodshed in the
county of Sutherland, that people can ford the river
Oykel dryshod, over dead men's bodies." "The day
will come when a raven, attired in plaid and bonnet,
will drink his full of human blood on * Fionn-bheinn,'
three times a day, for three successive days."
" A battle will be fought at Ault-nan-Torcan, in the
Lewis, which will be a bloody one indeed. It will truly
take place, though the time may be far hence, but woe
to the mothers of sucklings that day. The defeated
host will continue to be cut down till it reaches
Ard-a-chaolais (a place nearly seven miles from
Ault-nan-Torcan), and there the swords will make
terrible havoc." This has not yet occurred.
Speaking of what should come to pass in the parish
of Lochs, he said— "At bleak Runish in Lochs, they
will spoil and devour, at the foot of the crags, and will