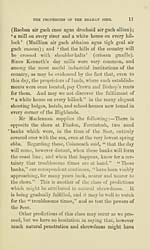 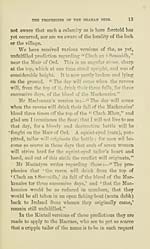 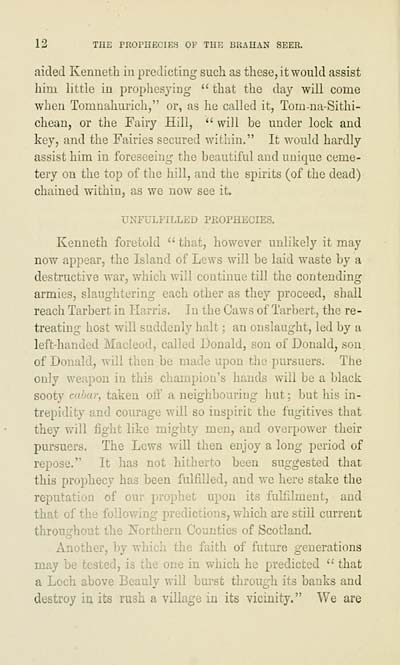 12 THE PROPHECIES OP THE BRAHAN SEER.
aided Kenneth in predicting such as these, it would assist
him little in prophesying " that the day will come
when Tomnahurich," or, as he called it, Tom-na-Sithi-
chean, or the Fairy Hill, "will be under lock and
key, and the Fairies secured within." It would hardly
assist him in foreseeing the beautiful and unique ceme-
tery on the top of the hill, and the spirits (of the dead)
chained within, as we now see it.
UNFULFILLED PROPHECIES.
Kenneth foretold " that, however unlikely it may
now appear, the Island of Lews will be laid waste by a
destructive war, which will continue till the contending
armies, slaughtering each other as they proceed, shall
reach Tarbert in Harris. In the Caws of Tarbert, the re-
treating host will suddenly halt ; an onslaught, led by a
left-handed Macleod, called Donald, son of Donald, son.
of Donald, will then be made upon the pursuers. The
only weapon in this champion's hands will be a black
sooty cahar, taken off a neighbouriug hut ; but his in-
trepidity and courage will so inspirit the fugitives that
they will fight like mighty men, and overpower their
pursuers. The Lews will then enjoy a long period of
repose." It has not hitherto been suggested that
this prophecy has been fulfilled, and we here stake the
reputation of our prophet upon its fulfilment, and
that of the following predictions, which are still current
throughout the Northern Counties of Scotland.
Another, by which the faith of future generations
may be tested, is the one in which he predicted " that
a Loch above Beauly will burst through its banks and
destroy in its rush a village in its vicinity." We are