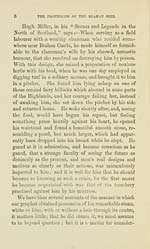 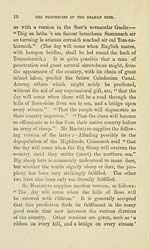 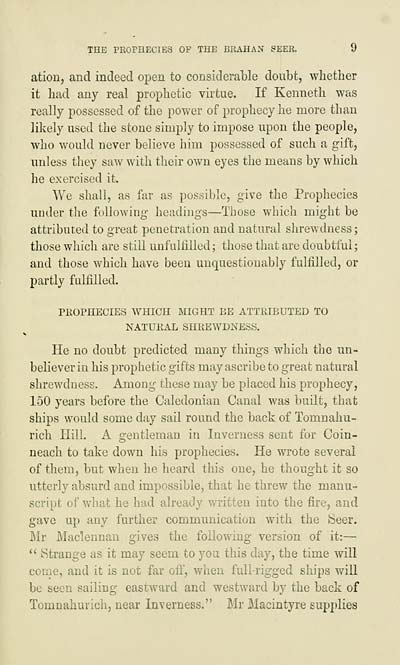 THE PROPHECIES OP THE BRAHAN SEER. 9
ation, and indeed open to considerable doubt, whether
it had any real prophetic virtue. If Kenneth was
really possessed of the power of prophecy he more than
likely used the stone simply to impose upon the people,
who would never believe him possessed of such a gift,
unless they saw with their own eyes the means by which
he exercised it.
We shall, as far as possible, give the Prophecies
under the following headings — Those which might be
attributed to great penetration and natural shrewdness ;
those which are still unfulfilled; those that are doubtful;
and those which have been unquestionably fulfilled, or
partly fulfilled.
PROPHECIES WHICH MIGHT BE ATTRIBUTED TO
NATURAL SHREWDNESS.
He no doubt predicted many things which the un-
believer in his prophetic gifts may ascribe to great natural
shrewdness. Among these may be placed his prophecy,
150 years before the Caledonian Canal was built, that
ships would some day sail round the back of Tomnahu-
rich Hill. A gentleman in Inverness sent for Coin-
neach to take down his prophecies. He wrote several
of them, but when he heard this one, he thought it so
utterly absurd and impossible, that he threw the manu-
script of what he had already written into the fire, and
gave up any further communication with the Seer.
Mr Maclennan gives the following version of it: —
" Strange as it may seem to you this day, the time will
come, and it is not far oif, when full-rigged ships will
be seen sailing eastward and westward by the back of
Tomnahurich, near Inverness." Mr Macintyre supplies