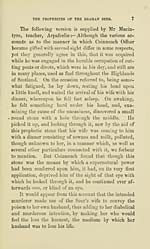 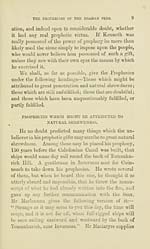 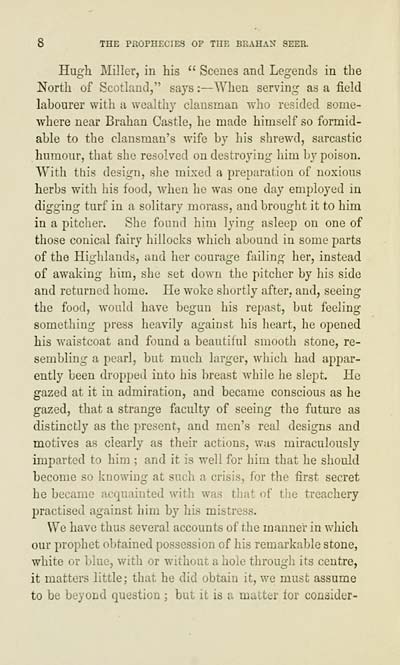 8 THE PROPHECIES OF THE BEAHAN SEER.
Hugh Miller, in his " Scenes and Legends in the
North of Scotland," says : — When serving as a field
labourer with a wealthy clansman who resided some-
where near Brahan Castle, he made himself so formid-
able to the clansman's wife by his shrewd, sarcastic
humour, that she resolved on destroying him by poison.
With this design, she mixed a preparation of noxious
herbs with his food, when he was one day employed in
digging turf in a solitary morass, and brought it to him
in a pitcher. She found him lying asleep on one of
those conical fairy hillocks which abound in some parts
of the Highlands, and her courage failing her, instead
of awaking him, she set down the pitcher by his side
and returned home. He woke shortly after, and, seeing
the food, would have begun his repast, but feeling
something press heavily against his heart, he opened
his waistcoat and found a beautiful smooth stone, re-
sembling a pearl, but much larger, which had appar-
ently been dropped into his breast while he slept. He
gazed at it in admiration, and became conscious as he
gazed, that a strange faculty of seeing the future as
distinctly as the present, and men's real designs and
motives as clearly as their actions, was miraculously
imparted to him ; and it is well for him that he should
become so knowing at such a crisis, for the first secret
he became acquainted with was that of the treachery
practised against him by his mistress.
We have thus several accounts of the manner in which
our prophet obtained possession of his remarkable stone,
white or blue, with or without a hole through its centre,
it matters little; that he did obtain it, we must assume
to be beyond question ; but it is a matter lor consider-